Chief (Engr.) Saliu O. Ahmed, the Managing Director/CEO of Benin-Owena Basin Development Authority and the holder of the title of Sadiq of Auchi Sacred Kingdom had another chieftaincy title bestowed on him as the Odufade of Okpe Kingdom by HRH, Oba E. O. Idogun, JP, OON, the Olokpe of Okpe Kingdom in Edo North Senatorial District of Edo state. 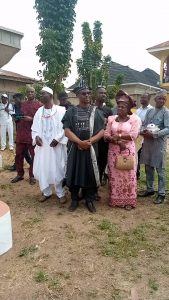 *Chief & Chief Mrs. Saliu O. Ahmed after the conferment of the title.

The conferment which event took place on the 23rd of November 2022 at Okpe Town was witnessed by dignitaries from all social strata including the political, socio-cultural, and captains of industry from within Nigeria and abroad. The event also brought home sons and daughters of Okpe Kingdom who came from far and wide to honour their king and to also felicitate with the latest honorees of one of the highest titles of the kingdom.

Giving the acceptance speech after the conferment, the Edo High Chief had this to say on behalf of himself and other personalities who were also honoured:

Speaking exclusively with Pegasus Reporter’s correspondent, a palace source said that the Odufade which translates literally as the “bringer or harbinger of joy” is usually reserved for personalities who have made contribution either personally or in their official capacity toward easing infrastructural needs of the kingdom. 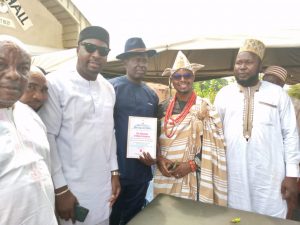 *The honoree, Chief Odufade Saliu O. Ahmed with will-wisher at the event