“For me, there’s nothing offered as a special media menu ,by either CNN, the BBC and the rest of the eurocentric media stuff, that can compare with Dr. Tonnie Iredia’s well researched and domestically self-reliant and audaciously branded Pointblank Media Menu” 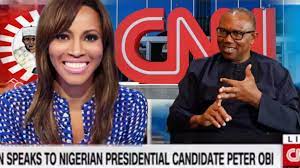 Jagaban Bola Ahmed Tinubu should not be cajoled and tempted to go for the CNN INTERVIEW CONFUSION, because,it’s a bad product for promoting African Inferiority complex and Self-denigration of our own talents at home!

I am still unhappy and sad with the ridiculous deceptions by the OBJ-ATIKOOLOOTED OFFSHORE SYNDICATES, for their selfish decision to privatise our broadcasts industry, because, it has only been nothing but a deceitful caveat to inferioritize our country’s giant strides to narrow the gaps against foreign offshore invasion of our identity.

In fact, God will not forgive,nor forever forget those opportunistic traitors who have sold the cultural system our founding fathers had laboured to shield us from the harmful shackles of global imperialism which is what the confused Peter Obi’s fraudulent and ambiguous participation in the CNN INTERVIEW CONFUSION is intentionally aimed at.

More than anything else, I see those participation as some form of assurance to their American sponsors and scouts in the Pentagon, that, they are their best puppet and hush-puppy any time, any day!

For me, there’s nothing offered as a special media menu ,by either CNN, the BBC and the rest of the eurocentric media stuff, that can compare with Dr. Tonnie Iredia’s well researched and domestically self-reliant and audaciously branded Pointblank Media Menu.

I think that, Asiwaju Bola Ahmed Tinubu, as the last man standing for African Proud Heritage, should create an acceptable environment to show to the World that Africa has its own talents, who are respected idols in their own field all over the World.

Indeed, I feel encouraged to recall a historic moment, one night, when I got a telephone call at about 11:30 in the night, from one of my mentors, the late Alhaji Akwe Doma, urging me, to stop what I was doing and tune my set to a live program called Hard talks , being anchored from the FOA’s Food and Agricultural Conference Forum from Rome, featuring Dr. Tonnie Iredia’s well articulated rebuttal of Eurocentric Worldviews about Africa’s status as the most corrupt continent in the world, during which the great thinking and intelligent Iredia extemporaneously lampooned the pretentiously self-centred and vanity -driven white crusading chauvinist, by telling him off, that, it takes 2 to tango and objectivity must be the glorious mission of journalism, to reinforce a good opinion, to wit, that, “without the white bribe givers, there wouldn’t have been irresponsible black takers”- case closed?

Who can beat this wonderfully profound and intellectually interrogative metaphor? That’s why I’m always fascinated by Dr. Iredia’s unassailable courage and intellectual maturity.

Now, this is why I don’t subscribe to this defeatist and shallow hangover slavish mentality of projecting our African worldviews on their racially prescribed media platforms in Europe, which is saturated with preconceived litany of orchestrated discrimination, reinforced by sectionally motivated diatribes and unaccounted innuendos.  Isn’t it what the OBJ-IBB confused candidate and his shallow arguments did, encouraged by his fellow IPOBS Biafran amateurish TV Anchor girl did, by railing some ethnophobic tirades against PMB?

I believe that, Dr. (Professor) Tonnie Iredia is beyond this trivial pursuit, because, my mentor is neither an ethnic ideologue or a religious bigot like Peter Obi and his ignorantly misbehaved CNN anchor girl, who did not hide her IBO tribal idiosyncrasies!