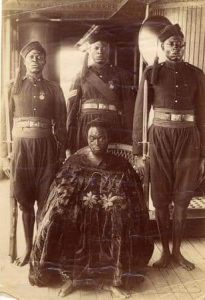 *The picture on the left is Oba Ovoranmwen with three ‘British’ guards standing behind him. The picture was taken at his trial.

Nigeria was amalgamated by the British in 1914. Queen Elizabeth was born April 21, 1926. She became Queen of England in 1953. Seven years into her reign, by October 1, 1960, Nigeria gained its independence and became a member of the Commonwealth. She visited Nigeria and was happy to accept the sovereignty of the largest black nation in the world.

Was she the one that colonized Nigeria, even she wasn’t born by 1914?

You want to talk history and colonization? Let’s start, I’m Benin. I can tell you on good authority that the Binis resisted with every drop of their blood and sweat the invasion of the Benin Empire and the Southern Protectorate, the British. The entire Southern Nigeria up to the coast of the Atlantic was under the Benin Empire, dukedoms and administrative institutions were established in various part of the region at that time.

As far back as the 15th or 16th century, Binis had already welcomed and received foreign visitors, both from Europe and other parts of the world. There was already a trade relations between the Portuguese and the Binis. At that time we sent people to Portugal to learn their trade and customs. The relationship was very cordial. When the British came, we sensed they were very different from the Portuguese we knew, so we became apprehensive and battle ready, because the oracle had warned of impending danger.

Allow me digress, before some folks begin to spew out half baked rhetoric to swindle the minds of the gullible. The southern parts of the Atlantic and the southeastern parts were the first to welcome and accept the British and their customs into their communities, except for a few who resisted them and feared for anarchy. Prof Chinua Achebe captured the story very well in his book, “Things fall apart.” They accepted their religion and were happy to serve them to the detriment of their own indigenous customs. The Binis already knew there was problem, King Jaja of Opobo was approached by the British, but declined their request because of his loyalty to the Oba of Benin at the time.

While the southern part were amazed to see “white people” in their villages, the Binis were already conversant with them, learnt their language and even allowed them build their worship centers without allowing it influence their lifestyle and customs we still hold dearly till date. The Binis always had regard for the freedom of worship, even though we believe strongly in ancestral worship. Ogun, Sango, Ifa,…etc were imported to Benin including Christianity. Ancestral worship isn’t the same thing as idol worship. 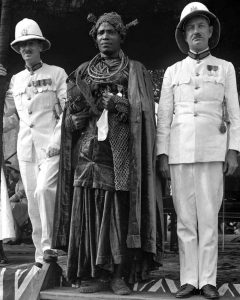 *Oba Akenzua standing between two British military officers during one of the ceremonies in Benin Kingdom.

The Binis consider their ancestors to be deities who act as intermediaries between the spirit world and the physical world. We didn’t and still do not have a problem with whatever religion people choose to practice. The Europeans knew these and they respected us for our strong cultural beliefs. Our religion is an integral part of our culture which have been strengthened over the years. That’s why in Benin you will see a church built on one side and a shrine built on the opposite side belonging to someone else. The worshipers in those shrines are more tolerant than those who worship in the church.

Because Binis are quite religiously tolerant, it is possible to invite a traditionalist to your church program on Sunday, and he will attend but that same evening he will still be at his shrine pouring libation to his deity. Okay, let’s flip this around, if a traditionalist invites you to his shrine just to observe his worship session, will you attend? Who is more religiously tolerant then? That was just a curve ball snack for me. You’re under no obligation to attend a worship session of any traditionalist. You don’t have to!

While most of Southern Nigeria had submitted their will to the British, they knew they still had a major problem and that was the Oba of Benin and his loyalists. The British sent emissaries to Benin at a time forbidden for the Oba to receive visitors. They were warned but they refused to heed the warning. Maybe they underestimated the Binis, or maybe it was a show of their might. To their greatest surprise, the Bini war chiefs slew and drew first blood. News got to the British that their emissaries have been beheaded. Yep! That angered them and they decided to launch an attack.

It became a bloody mistake for both parties. All the soldiers sent were killed by the Benin warriors. I’m talking about regimented guerrilla warriors skilled in the art of tactical warfare and military reconnaissance. They were shocked to see fortified trenches (moats) dug around the city of Benin. The British military had to call for reinforcement and backup. At the time, the British high command within the southern protectorate was located in Calabar. Do you know where soldiers and guards were recruited from to fight the Binis? Okay! Your guess is as good as mine. Do you really want us to continue the talk about the colonization of Nigeria? 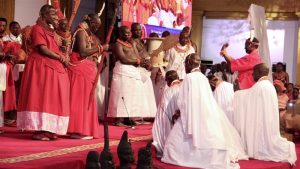 By 1897, the British had fully reinforced and decided with bitter vengeance, it’s was time to teach them a lesson they will never forget for embarrassing the British like that. They came to massacre the people with the help of the locals they had recruited. The invasion was executed by a couple of their commanders and artillery, but a huge portion of the army were made up of locals within the Southern Protectorate. These regions are made up of states within the South South and South East of Nigeria. We fought a bloody war with an enemy helped by people of the same region. How ironic, isn’t it?

By the time the massacre was done and over with, they took the Oba of Benin alive to Calabar and he was deposed. Of course they couldn’t kill him, but they made sure he never set foot on his kingdom again. It was after the “Great Benin Massacre” of 1897, that they British began to start consolidating plans to amalgamate both protectorates under their control. The Northern Protectorate was already submissive to them, the Southern Protectorate was still very submerged in chaos and crisis. The two couldn’t be amalgamated yet. Oba Ovoranmwen was still very much alive even when he had been deposed. They feared, his influence could still rock the boat for an insurrection. They waited till he died in 1914.

There you have it folks. The merger of both protectorates was concluded after the death of the Oba that caused them so much trouble. For those who are sticking their tongues out talking of colonization, maybe you should go back to your history to see the role your ancestors played in allowing colonization take place in Nigeria. How many of you still believe in your culture? How many of you are even proud to speak your native language in public?

The picture on the left is Oba Ovoranmwen with three ‘British’ guards standing behind him. The picture was taken at his trial. Do these ‘British’ guards look white to you? The picture on the right is Oba Akenzua standing between two British military officers, I believe during one of the ceremonies in Benin Kingdom. At that time both kingdoms had started reciprocating the gesture of respect and reconciliation. Oba Akenzua, even allowed his heir apparent, Oba Erediawa school in England. Oba Erediawa had an English name, “Solomon Akenzua”, before he ascended the throne of his ancestors. The relationship has been cordial since then. Why not?

America fought a bloody war of independence with the British, called “The American Revolutionary War” in 1775. By July 4, 1776, “The Declaration of Independence” was made. Today the United States and Britain are the world’s strongest ally. Nothing happens in the US without Britain getting involved, same thing with Britain. America is always on their side. They fought for their Independence, we negotiated ours on the floor of the House of Assembly in Lagos, and with champagne glasses at dinners. No blood was shed when we asked for ours. But just six years down the line, we slid into a bitter civil war. Since then till now, we’ve not being able to keep a united country by ourselves.

Though the sad event of 1897 is still fresh in our memories, we also tried to build cordial relationships with the British and they in return have reciprocated that gesture. Most of our stolen artifacts which still reside in their museums are being returned. Citizens of Nigeria are holding prominent positions in Britain, either in government or in the private/public sector. Nigerians living in the UK are mostly doing better than they would have in Nigeria. So for those of you who will try to spit your bitter and evil bile against the deceased queen and her country, go check your history, know the role your people played in being colonized. Check what your so-called political and religious leaders are doing to you, ask yourself if you’re logical in your reasoning, then wish the dead a peaceful rest, respect her country, let her people mourn her in peace, and go about your personal business. Everyone will die one day.

Read Our Preceding Post: Political Arena: The Obidients, The Jagaban And The Icarus Syndrome – FFK