“I would like to apologise for my outburst and, if possible, I would like to invite this supporter to watch a game at Old Trafford as a sign of fair-play and sportsmanship” 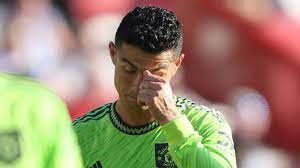 Cristiano Ronaldo has been cautioned by cops after an incident last season. Footage appears to show him slapping a phone out of a young fan’s hand

The Manchester United striker appeared to slap Jacob Harding’s hand as he left the pitch after his side was beaten by Everton at Goodison Park last season.

Footage appears to show him slapping a phone out of a young fan’s hand. He later apologised to the 14-year-old, who has autism.

Earlier this month, the Portuguese star was interviewed by police under caution in relation to an alleged assault and criminal damage.

In a statement on Wednesday, Merseyside Police told the Mirror: “We can confirm that a 37-year-old man voluntarily attended and was interviewed under caution in relation to an allegation of assault and criminal damage.

“The allegation relates to an incident following the Everton v Manchester United football match at Goodison Park on Saturday 9 April.

The paper reports that Ronaldo has agreed to pay compensation to the schoolboy but Man Utd bosses confirmed they won’t be taking action back in April.

In a post online, Ronaldo said: “It’s never easy to deal with emotions in difficult moments such as the one we are facing.

“Nevertheless, we always have to be respectful, patient and set the example for all the youngsters who love the beautiful game.

“I would like to apologise for my outburst and, if possible, I would like to invite this supporter to watch a game at Old Trafford as a sign of fair-play and sportsmanship.”

He had been visibly angry as he made his way off the turf following the Red Devils’ dismal loss at the hands of struggling Everton.

The United superstar appeared to lash out as he headed back to the away team dressing room.

After the incident, Jacob’s mum Sarah Kelly said: “At full-time the United players started walking off.

“We were right by the tunnel – my son was there, videoing them all.

“Ronaldo then just walked past, with a terrible, terrible temper, and smashed the phone out of his hand.”

She said she was left in tears and Jacob was in “complete shock”.

“He’s really upset and it’s put him off going to the game again. We had an absolutely brilliant day up until those final few seconds,” she said.

His future has been the subject of intense speculation all summer, with reports he wants to leave United in order to play Champions League football.

But Ronaldo has since issued a statement to say “the truth” would be revealed when he participates in an interview in a couple of weeks’ time.

He added: “The media is telling lies. I have a notebook and in the last few months of the 100 news I made, only 5 were right.”

Ronaldo returned to pre-season late amid the reports of his exit and was subsequently only named on the bench to face Brighton on the opening day.

While he was powerless to help United overcome that challenge, he then played the full 90 minutes in the humiliation The Red Devils suffered in their 4-0 defeat at Brentford last weekend.

Pegasus Reporters: making news that reaches your audience| Advertise with us! | Join our readers list on Telegram (+234 813 308 8344) Follow us on Twitter @pegasusreporters | We are on Facebook; The PegasusReporters | Chat with the Editor, on WhatsApp (+234 815 444 5334) | Contact the Editor, Mallam Oyakhamoh Y. Carl-Abu’Bakar with your adverts and articles via pegasusreporters@gmail.com