“The newest antagonists of a Muslim-Muslim ticket, who are being dominated by their southern counterparts, would prefer to slaughter Shettima, a Northern Muslim, and spare Atiku, also Northern Muslim. The whole drama of not being represented has become a new vocation in a cavalier manner, to serrate the cord of Asiwaju Tinubu for not choosing one of them; yet CAN presidency has just been won by another southern Christian, Daniel Okoh.“ 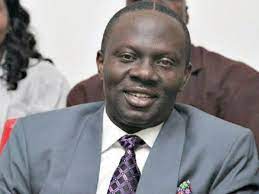 And he came with the salesmanship, oh I have joined official PDP bla-bla-bla. And the presidential candidate of the PDP is a “Northern Christian”, whose name is Atiku Abubakar. Isn’t that awry? Isn’t that smelling of hypocrisy? You spoke so glowingly of Christianity as if you were born in Bethlehem and just returned from a Holy pilgrimage to Jerusalem.

The next stroke was to embrace a Muslim Presidential candidate and reject a Muslim Vice Presidential candidate. When I said that CAN was being sponsored by PDP, some people almost ate me raw; but they are coming out gradually. Babachir, Dogara, and my friend Bwala are all working for Atiku; their northern fake “Christian” Presidential candidate. That is the way of an inchoate system, riddled with egocentric political engagements; all driven by selfish interests. You were once a bedroom friend of the APC candidate, but now all of a sudden, because you did not make his choice, you bungled your friendship, and suddenly became a politico-evangelist, crisscrossing the nation, seeking buyers for your divisive politics. Dogara has suddenly become a Deacon, Bwala a Pastor and Babachir an arch-bishop, three musketeers seeking ecclesiastical relevance; individuals who have not been known to have impacted Christianity before now.

I am aware that Babachir has a new job on his hands; to stop Tinubu’s presidential aspiration at all cost. Remember that Kashim Shettima was the one who petitioned against him on the grass-cutting corruption allegation that swept him out of office as the nation’s Secretary to Government. I am aware that Babachir is close to President Buhari and he is ready to stoke any fire of animosity to prove the point that the Muslim-Muslim ticket was dead on arrival. But the same persons who are complaining about a Northern VP candidate, have gone to embrace a Northern Muslim Presidential candidate of the PDP, Atiku Abubakar. They simply hate Shettima! Not on account of his faith, but for obviously seeing off Babachir from his exalted position as SGF over funds that were meant for Christian IDP in the northeast zone. It is not an accident of history that the troika of Dogara, Bwala and Babachir is from the northeast. They speak so vociferously as though they are strong adherents of the Christian faith, with strong beliefs in equity, fairness and justice. Just on Thursday, 28th July, the Christian Association of Nigeria, CAN, unveiled its latest president Daniel Okoh, in Abuja. 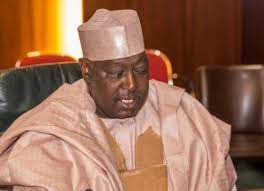 I had thought those northern Christians who are strongly against the Muslim-Muslim ticket would raise dust over the southern domination of CAN presidency. They were reticent initially; hid their tails in between their legs, displayed their hypocrisy and tried to divert attention by making sure Yakubu Dogara gave a damning speech. But that speech exposed the double standards of a body that has remained the exclusive preserve of Southern Christians in its 47 years of existence. Yet, the latest political evangelists would not see anything wrong in that. The newest antagonists of a Muslim-Muslim ticket, who are being dominated by their southern counterparts, would prefer to slaughter Shettima, a Northern Muslim, and spare Atiku, also Northern Muslim. The whole drama of not being represented has become a new vocation in a cavalier manner, to serrate the cord of Asiwaju Tinubu for not choosing one of them; yet CAN presidency has just been won by another southern Christian, Daniel Okoh. How do you reconcile those? Babachir Lawal is a very close friend of Tinubu, so I have come to know. Becoming SGF ab-initio, was partly due to the influence of Tinubu; but he cut his own journey short by his gluttonous conduct. In this journey, Babachir has all along been the foot soldier of Tinubu in projection to becoming his running mate; forgetting his EFCC ongoing trial. The committee that was set up made the options of Muslim/ Christian choice open. It wasn’t a conclusive recommendation that it must be a Christian VP.

Perhaps, Babachir was working to become the VP candidate and now feels terribly disappointed that his friend overlooked him to pick the man who saw him off from the exalted office as SGF. Dogara left PDP sometime ago, on an adventure to seek the VP slot to any Southern Muslim candidate. He had positioned himself for that position until the rug was pulled from under his feet. It was all about self. Nothing altruistic!! It is all about enlightened self-interest, cashing in on the Christian platform to make a case for Northern Christians. If they were that pro-northern Christians as being presently promoted, how come they have maintained conspiratorial silence all this while when the South continues to dominate CAN presidency? Isn’t it all about representation, balancing the odds and sustaining a culture of belongingness? Dogara spoke as if his fellow Muslim brothers have not been useful to him. Was it not Aminu Tambuwal, a Northern Muslim, that made it possible for Dogara to become the number four man in this country back then; against a Muslim candidate, Gbajabiamila? It was convenient for Dogara at that time but now seems odd because he was not chosen. Double standards posturing that cannot sustain any concentric argument on the issue of balancing between the faiths. 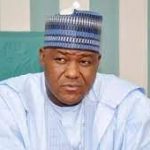 Here is the caveat; Bwala does not want the Muslim Northern VP candidate of Shettima, but desires a Muslim Northern Presidential candidate. Doesn’t that smell of hypocrisy? And they have suddenly become errand boys for Atiku, going to Rivers state to meet the indomitable Nyesom Wike, who understands the vile in their political machinations. Suddenly, Dogara and Babachir have become political evangelists seeking to deepen the schism in the Muslim/Christian divide. Their sermon is all about Christianity as if they won’t need Muslims to push through with their selfish ambitions. They suddenly remembered Nyesom Wike and felt the need to pacify him, as messengers of Atiku. Very interesting times one would say. When Dogara spoke at his Christian platform last week, he drew references from civilised democracies as though they ever get to practice what obtains in those climes. When Dogara sought to be Speaker, no one remembered him as a Christian, how suddenly he feels he cannot tolerate a Muslim as a Vice Presidential candidate, is a reality that confounds common sense. What Dogara, Bwala and Babachir are doing is inimical and dangerous precedence that would haunt them for a long time. Aside from widening the Muslim-Christian divide in the Northern part of the country where they come from, they are exhibiting very uncomplimentary intolerance of The Muslim religion in Nigeria. How far they would succeed with this divisive method is left to be seen, but I dare say that it is an ill wind that will turn around to hurt the system.

I doubt if the three musketeers can boast of having invested in the Christian faith more than or even as Asiwaju Bola Tinubu, whose wife is a pastor in the Redeemed Christian Church of God, or Kashim Shettima who has rebuilt many churches that were destroyed by insurgents in Borno state have. Exploiting this case of Muslim-Muslim to drive the nail of division into the wedge, is a very disturbing resort that won’t heal so soon. Should Northern Muslims decide to behave in a similar manner, your guess would be as good as mine. They speak as if they are holy, (at least, one) of them allegedly stole public funds, and enriched (himself) whimsically, without remembering the altar of God. Money meant for IDPs, they misappropriated. They padded budgets and live in exotic homes beyond their legitimate income, but they are ready to preach God and Christianity all for the sake of politics. I am speaking in generic terms to underscore the hypocrisy in the system and the inherent contradiction in our political trajectory. Our elite should stop playing to the gallery by exploiting religion, using it as a gambit in their ploys. Politics is politics, religion is religion. Tell me, where is the place of the traditional religion in our current discourse?

How many churches have Pastor Yemi Osinbajo built in the last seven years as a Vice President? or how many mosques has President Buhari built in the last seven years? Both mosques and churches have suffered untoward destruction at the hands of insurgents and bandits. They visited the Owo violent attack, Pastor Osinbajo was there too. He saw what transpired, he shared in the people’s situation and left there silent. Their Muslim Southern candidate, Tinubu visited the Owo attack site and donated N75,000,000.00 (Seventy-Five Million Naira) as an intervention to help Christian victims. Who is more Christian at heart and in action? Within the APC during the convention, how come Christian delegates were not able to produce Pastor Yemi Osinbajo as their candidate? Or what is the meaning of this present onslaught? To heat up a system that is already boiling? Dogara, Bwala and Babachir should find new jobs on how to renew alliances and build religious harmony, instead of widening cleavages for mere political positions. Enough of these double standards, please.