Science & Environment: The Future of Mud – Championing Lower-Tech Material Than Concrete To Prepare For Climate Change.

“Raw-earth-based building materials, such as adobe, rammed earth, and the compressed-earth blocks used in the Djoloff and Kéré buildings, have more thermal inertia than concrete, which means they attenuate heat and cold more efficiently and reduce the need for so much air-conditioning” 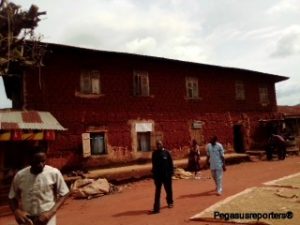 When Germany’s president, Frank-Walter Steinmeier, came to Senegal last February for an economic summit, he took a break from conference rooms in the capital city of Dakar to get his hands dirty, literally, as he learned to make compressed-earth blocks from a mix of iron-rich soil, sand, water, and a bit of cement. His block-making tutorial was part of a groundbreaking event for a cultural institute promoting German-language study.

The institute’s new building was designed by the distinguished Burkina Faso–born and Berlin-based architect Francis Kéré, who is renowned worldwide for his graceful structures adapted to their local climates. The building in Dakar is oriented so that nearby trees provide shade, and its thick walls—made of the type of unfired compressed-earth bricks Steinmeier tried his hand at making—insulate the interior from the hot Senegalese climate. A layer of claustral, or perforated walls, wraps around the building like a membrane, filtering sunlight and directing airflow.

At the event, Senegal’s minister of urbanism, Abdoulaye Saydou Sow, praised Kéré’s choice of materials, promising that the government would “work to integrate these types of materials into our building projects.”

The Senegalese-Cameroonian architect Nzinga Mboup, 33, was in the crowd for the occasion, her bronze dress shining amid the sea of dark suits, and she was thrilled by the minister’s speech. Mboup, a co-founder of a Senegalese architectural firm called Worofila, is working with Kéré on his Dakar project. Her firm also works with the local climate, often borrowing low-tech, passive cooling techniques from West African vernacular building traditions. Such simple strategies may not sound revolutionary, but in Senegal’s cities, they are. 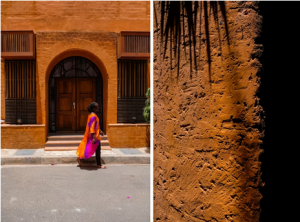 Today, Dakar is primarily a city of boxy, concrete buildings, their flat roofs used for hanging laundry, lodging sheep, or both. And new boxes are always sprouting: A panorama of grey-walled construction sites is visible from any balcony, and city sidewalks are chronically clogged with rebar, bags of cement, and piles of sand and gravel. Concrete’s heat-retaining properties are all wrong for the Senegalese climate, which will continue to get hotter over the next few decades according to climate-change models. Yet concrete has become the “traditional” building material in a country where, as Mboup points out, at least four distinctive mud-construction techniques persist. In the north, where there’s not much rain, people build houses with banco, a kind of adobe made with sun-dried bricks; in the forested areas of the south, builders use timber frames to create wattle-and-daub structures, or they hand-mould earthen buildings and top them with steep, overhanging roofs to keep rain away from the walls. For generations, Senegalese builders have used mud to construct not only small houses and granaries but multistory houses and imposing mosques.

I first met Mboup in the rooftop café of the Djoloff Hotel, a building that breaks from Dakar’s concrete-box tradition. The hotel’s high ceilings, gracious courtyards, and bougainvillaea-covered verandas are characteristic of the French colonial style, but nearly half of the building is constructed from unfired mud bricks, and their ocher splendour contrasts sharply with the city’s gray palette. Mboup and her co-founder, Nicolas Rondet, often meet people here; Worofila had nothing to do with the building’s design, but the firm’s office is located not far away in the same quiet neighbourhood, and to Mboup and Rondet, the elegant hotel demonstrates the potential of modern mud building. As Mboup and I talked about the bricks she often uses in her design, she sometimes reached out to touch one in situ.

When Mboup tells new acquaintances in Senegal that she’s an architect who specializes in mud construction, they’re always surprised. “They say, ‘How can you build with mud? Mud doesn’t last,’” she says. They may be remembering horror stories about mud houses leaking when the seasonal rains start, and sometimes even dissolving or crumbling in torrential downpours. They often think concrete is easier to use and a safer investment – through poorly built concrete buildings have also crumbled during past monsoon seasons. 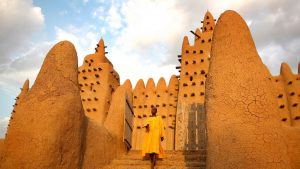 *A man exits the largest mud-brick building in the world, the Grand Mosque, in the ancient town of Djenne, Mali, April 29, 2007 file photo.

In general, concrete buildings are more resistant to rain than many kinds of earthen structures, especially those that aren’t protected with a high foundation and a good roof. And they do require less maintenance than some mud buildings, which need to be replastered regularly to maintain their structural integrity. But concrete carries its own costs. “People build houses in concrete,” Mboup says, “and then they can’t sleep at night because it’s too hot.”

Raw-earth-based building materials, such as adobe, rammed earth, and the compressed-earth blocks used in the Djoloff and Kéré buildings, have more thermal inertia than concrete, which means they attenuate heat and cold more efficiently and reduce the need for so much air-conditioning. These materials, along with greater attention to building orientation, help reduce energy use when demand is highest.

Culled from The Atlantic Daily

Read Our Preceding Post: Ka’aba Tops List Of Most Expensive Buildings On Earth At A Cost of $100 Billion.