WHO Declines To Label Monkeypox A Global Emergency

Along with accepting the panel’s decision, WHO Director-General Tedros Adhanom Ghebreyesus issued a statement that said he was “deeply concerned” about the monkeypox outbreak. “This is clearly an evolving health threat that my colleagues and I in the WHO Secretariat are following extremely closely,” 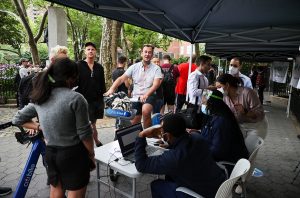 After 2 days of deliberation, an advisory panel convened by the World Health Organization (WHO) has concluded the monkeypox outbreak that has spread to more than 50 countries does not yet warrant the declaration of a Public Health Emergency of International Concern (PHEIC), its highest alert level. WHO currently has PHEIC declarations for polio and COVID-19, and many infectious disease scientists had expected one for monkeypox. Monkeypox is endemic in many African countries but has never before spread so widely on other continents; more than 4100 cases have been recorded so far.

“I am very surprised by the decision,” says Boghuma Titanji, a virologist at Emory University. “It feels again like a missed opportunity to focus much needed attention on the current situation.” Gregg Gonsalves, a Yale School of Public Health epidemiologist who advised the committee, also disagrees with its judgment. “I think they made a big mistake. They punted.”

The panel’s report issued suggests there was some disagreement on whether to issue the global alert. “While a few Members expressed differing views, the committee resolved by consensus to advise the WHO Director-General that at this stage the outbreak should be determined to not constitute a PHEIC,” it said.

Along with accepting the panel’s decision, WHO Director-General Tedros Adhanom Ghebreyesus issued a statement that said he was “deeply concerned” about the monkeypox outbreak. “This is clearly an evolving health threat that my colleagues and I in the WHO Secretariat are following extremely closely,” he added. “It requires our collective attention and coordinated action now to stop the further spread of monkeypox virus using public health measures including surveillance, contact-tracing, isolation and care of patients, and ensuring health tools like vaccines and treatments are available to at-risk populations and shared fairly.”

A PHEIC declaration legally obligates WHO member countries to follow the agency’s recommendations, such as sharing data on cases, although critics have questioned whether the declaration has had much impact in other outbreaks. WHO was also criticized for a delay in issuing a PHEIC for COVID-19.

In the WHO panel’s report on monkeypox, the advisers said they would reconsider a PHEIC if there is new evidence that the outbreak is spreading to other countries or to new groups or that the severity of the disease is increasing. The vast majority of cases so far have affected men who have sex with men and hospitalizations have been rare. Signs that the monkeypox virus is establishing new animal reservoirs outside Africa could also warrant a PHEIC reconsideration, the group said.

“I think some of these criteria will be met almost immediately,” Gonsalves says. Although the panel’s report mentions a potential re-evaluation in 21 days, Gonsalves would like it to come sooner. “I hope the director general is smart enough to convene people again in a much more timely manner.”

The panel’s monkeypox decision raises larger questions, says Alexandra Phelan, a lawyer at Georgetown University who specializes in global health policy. “This is the public health global alert mechanism and I worry what waiting a few weeks before sufficiently grabbing political attention will mean for community transmission,” she wrote in an email to Science.

The committee was right to note the injustice of monkeypox outbreaks having been neglected for years, she added, but “I think it is quite clear that the time has come to reconsider what the goal of PHEICs are and whether the criteria are fit for their purpose of alerting the global community and sufficiently equitable in an interconnected world.”

Read Our Preceding: Widespread Misery’: Why So Many Lawyers Hate Their Jobs – And Are Desperate To Quit – An Insider Story