“They at the weekend threw the first stone by the online reports that Tinubu did not go to primary and secondary schools and that he allegedly told the Independent National Electoral Commission (INEC) that unknown soldiers stole his degree certificates,” one of the sources hinted. 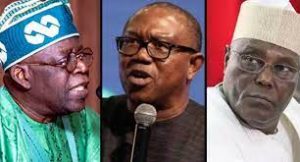 A grand conspiracy by opposition political parties and groups to discredit All Progressives Congress (APC) presidential candidate, Asiwaju Bola Tinubu, ahead of the coming presidential election has begun to unfold as paid writers take on the aspirant’s educational credential in a first of the series of propaganda to sway public support for the APC candidate.

A report by The Liberation News published on June 25th said that sources close to a midnight meeting convened by some top politicians from the Peoples Democratic Party (PDP) and Labour Party (LP) revealed that a sum of N2billion had been earmarked for the purpose of discrediting Tinubu who is widely acknowledged as the candidate to beat.

The sources, according to the report, who craved anonymity owing to the sensitivity of the issue, said the politicians met at a popular hotel in Asokoro, Abuja and reached the conclusion that only damaging propaganda can stop Tinubu from becoming the next President.

“This set of people is scared stiff by the intimidating political profile and structures of Tinubu, and especially by the fact that he is a tested and trusted reformist.

“They have, therefore, jointly contributed close to N2 billion to start launching campaigns of calumny and also instituting various spurious legal actions to force the APC to make him withdraw from the race before the end of the year.

“They at the weekend threw the first stone by the online reports that Tinubu did not go to primary and secondary schools and that he allegedly told the Independent National Electoral Commission (INEC) that unknown soldiers stole his degree certificates,” one of the sources hinted.

Besides, the online gathered further from the source that Tinubu’s detractors had set aside several millions of Naira intended for newspaper houses for the sole purpose of publishing damaging reports that will put Tinubu in bad light before the reading public.

But reacting to the latest online reports casting aspersion on the academic qualification of Tinubu, an Abuja rights group, The Civil Advocate (TCA), has asked those bandying the latest reports to “shut up”.

In a statement by its President, Comrade Waheed Abdullahi, and General Secretary, Comrade Samuel Chinedu, the TCA said raising fresh issues on Tinubu’s academic qualifications now is like flogging a dead horse.

“Here is a matter that had been contested up to the highest court in the land, which is the Supreme Court and Tinubu was given a clean bill of health as the apex court affirmed that the allegations that Tinubu forged his certificates lacked merit.

“We thus wonder why the man’s detractors find it convenient to run to town with their tar brush in a trite issue that has been thrown into the dustbin of history,” the TCA quipped.

The rights group said raising lame issues now is only meant to distract Tinubu and make him lose focus on his campaign strategies.

The group added that it particularly identified with the welfarist agenda proposed for Nigerians by the former Lagos State Governor and one-time senator of the Federal Republic of Nigeria.

“We are particularly impressed by the reform agenda proposed by Tinubu for his Presidency; especially his vow to constitute State Police aside from Federal Police, with a view to stemming the tide of insecurity that has lain Nigeria prostrate.”

The TCA, as such, urged Nigerians to rise above “the politics of witch-hunt and financial greed, and instead task people aspiring for public offices on what they have to offer in terms of programmes”.

Tinubu is the only candidate among the existing ones that can bring about the desired change in the country, so says a prominent Nigerian who does not want his name in print.

It will be recalled that the media and social media have been agog with reports querying Tinubu’s educational qualifications that were long settled by a ruling of the Supreme Court.

Originally published by The Liberation News