‘He calls himself a “Roadmaster”, now we know that he is a ‘Loan-master’ of scheming. Now we know that his vaulting ambition to be Vice President has caused Delta people N175Billion in debts, to emerge as a running mate’ 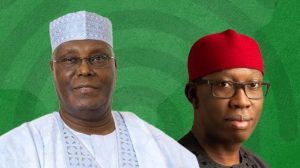 After borrowing N175Billion on Delta state within a month, mortgaging the future of Delta generations unborn to fund his quest to be Vice President in 2023, we expect Governor Ifeanyi Okowa to rush to Church for another hypocritical thanksgivings to mock himself and not God.

The choice made by Atiku to pick Okowa who has run aground Delta is a costly mistake over which the presidential flag bearer will lick his wounds in failure to actualize his presidential dream again.

Atiku had no choice but to pick Okowa who is prepared to engage his administration in borrowing as much as it will take to jointly fund Atiku to win the PDP presidential primaries and to also further bankroll PDP presidential/Delta governorship campaigns for the general elections.

In less than two months, after borrowing N150Billion earlier to impose unfit Sheriff Oborevwori as Delta PDP Guber candidate and then going to Abuja to fund broke Atiku’s victory in the presidential primary, Okowa has the impunity to borrow another N25Billion to buy his way as a running mate to Atiku after the party elders and leaders chose Wike above him.

As for Atiku, he never cares if Delta remains in debt for the next 100 years as a result of his running mate’s reckless borrowing into his private vault to finance his insatiable quest for political appetite. It means an Atiku will put the country in “much more severe debts” than Buhari has done if he is elected president.

As for Okowa, he has no human conscience. He could go to any length, to backstab, lie, be cunning, deceitful, and betray to have his way of sustaining his dirty political career of greed and clannishness.

He calls himself a Roadmaster, now we know that he is a ‘Loan-master’ of scheming. Now we know that his vaulting ambition to be Vice President has caused Delta people N175Billion in debts, to emerge as a running mate.

From all indications, he will borrow more to fund the campaigns. Apparently, the desperation for all of this is to buy immunity as Vice President. Okowa knows he will not evade imprisonment for plundering the state treasury blind on several billion he is borrowing.

Okowa will not go unpunished. His cup is filled to the brim already. It’s just a matter of time. It will not be well with Okowa.