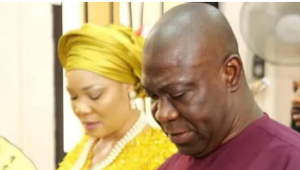 The Uxbridge Magistrate Court in London has denied bail to former Senate President, Senator Ike Ekweremadu and his wife Beatrice over claims that they trafficked a 15-year-old boy from Lagos to the UK with the intent to harvest his organ.

The prosecutors said the Ekweremadus’ were being charged for bringing the 15-year-old boy from Nigeria to the UK with the claim that he was to be given a better life in the UK but was actually to harvest his organ. The prosecutors told the court that the former Senate President procured a passport for the boy and claimed he was 21 years old but they discovered that he was 15 years old.

Ekweremadu and his wife had separate legal representations and prayed the court to release them on bail but the Magistrate, however, dismissed their prayer. The couple has surrendered their passports to the UK government.

The couple was arrested at Heathrow airport, on their way to Istanbul, Turkey. According to the prosecutors, it is believed that they were on their way to procure another organ as they could not harvest the boy’s organ. The prosecutors also stated that $20, 000 was found on Mr Ekweremadu.

According to AriseTV, the red flag that stopped the organ from not being harvested came after the boy truthfully disclosed his age to the doctors at the Royal Free hospital in the UK. The doctor reportedly canceled the procedure. The boy was taken from a family who according to the prosecutors treated him like a slave, after he escaped and found his way to the police where an investigation started, leading to the couple’s arrest.

After much deliberation, the Magistrate ordered their remand in custody till July 7 for the next hearing on the case.

Read Our Preceding Post: A REBUTTAL: Who Else Could Have Made It But Igbo? By Kichime Goyang Gotau