Peter Obi: The Acute and Chronic ‘Obi-session’ in Nigeria – By Uzor Maxim Uzoatu

“Peter Obi is the obsession of new day Nigerians, and this reality gave birth to the word “Obi-session” which has since been added into the lexicon. Nobody is neutral in the Obi-session matter – there are those who are for, and there are others who are against, and neither side can be shouted down” 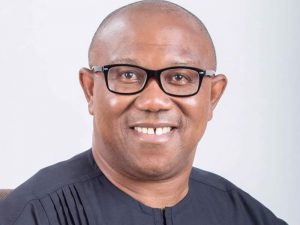 There is obsession and there is Obi-session. The diff, as the advert says, is clear. The 2078-page Webster’s Encyclopedic Unabridged Dictionary of the English Language bought for me by the legendary South African poet, Dennis Brutus, at the University of Pittsburgh, USA, back in 1989, defines “Obsession” thusly: “the domination of one’s thoughts or feelings by a persistent idea, image, desire, etc.”

“Obi-session”, on the other hand, can be defined as the domination of the thoughts and feelings of an entire country by one man named Peter Gregory Obi. Peter Obi is the obsession of new day Nigerians, and this reality gave birth to the word “Obi-session” which has since been added into the lexicon. Nobody is neutral in the Obi-session matter – there are those who are for, and there are others who are against, and neither side can be shouted down. It is akin to madness that is either acute or chronic, depending on the neurosis or psychosis of the patient in full stride.

The matter started innocuously enough when one universally celebrated stingy man named Peter Obi raised some dust that he was poised to aspire to be president of Nigeria via the vehicle of the Peoples’ Democratic Party (PDP) that had put its party ticket at a forbidding N40 million per contender. The noise was loud all over the land that the miserly Peter faced national disgrace at the party primary because he would be too tight-fisted to bribe the delegates with dollars like the other aspirants. One loudmouth aspirant from out of the Rivers of down south even made the pre-primary boast that he had bought over the entire delegates from poor Peter’s state!.

The sting in our story is that while Peter is still standing the boastful loudmouth out of the Rivers has been beaten into a drunken stupor such that he has completely lost his voice. A tear for the boastful tout! The dogged Peter chose to ease himself away from the dollar bazaar of the once self-advertised biggest political in Africa, PDP, only to find comfort in the party of labourers, carrying along his abiding philosophy: “We no dey give Shishi.” Nigeria’s irrepressible man of ideas, Prof Pat Utomi, stepped down for Peter to assume the presidential mandate of the poor man’s party. The fear then shot up all over the land that it was impossible for a poor bloke with only a bicycle getting into a presidential contest with the juggernauts of bullion van democracy. Peter boldly declared that he is not interested in gathering mountains of dollars and pounds sterling but is only interested in investing in the youths of Nigeria.

Before our very eyes, we saw the daring youths of the land rising in support of Peter and declaring that they have enough stuff in them to raise enough quid for him to defeat all-comers in any contest. Like play, like play, as they say, a revolution is born. The country has since been galvanised into frenetic action of unprecedented permanent voters’ card (PVC) registration and general political participation. There is no greater cult figure in the country today, it’s frightening. The naysayers to the Peter phenomenon stress that the man’s voters only exist in the social media, and that elections are not won on social media. The supporters who always maintain that they are “OBIdient” stress that once the Independent National Electoral Commission (INEC) whose voters’ registration platforms have been overwhelmed organises a free, fair and transparent election, their adored one will emerge as the sure winner in the avowed drive to “Take-Back-Naija.”

The antagonists of the plan maintain that Peter and his poor party cannot boast of any structure whatsoever but the protagonists insist that there can be no better structure than the millions of unemployed and under-employed Nigerians rooting for the redoubtable game-changer. No side is ready to yield ground, and thus the entire country is enmeshed in the new affliction named Obi-session. It truly astounds that an entire country is obsessing about a man who is reluctant to buy popularity with hard cash. It takes a different make of politician to have high-octane concerts staged in his name without him putting down any Shishi. The supporters are raising all the needed money all by themselves and have backed Peter all the way in his campaign of replacing consumption with production in Nigeria.

The daredevil youths have put out multiform images such as the almost blasphemous one in which Peter is being crucified between two thieves – in the manner of Jesus the Christ! The classic Western film “The Good, the Bad, the Ugly” has equally given the youths a leitmotif in which Peter is depicted as “The Good” and the duo of top contenders as “The Bad” and “The Ugly” The incumbent man in power is seen as “Frying pan” while his party’s candidate has been given the toga of “Fire” which simply means that the country cannot afford the calamity of “falling from frying pan into fire.” Obi-session makes Nigeria throb with the madness of total obsession.

Now that I have finished this article, I am calling on my young son Chimel to buy me the data with which to send the piece out for publishing only for the jocular lad to reply me thusly: “Dad, we no dey give Shishi!” Why am I so blest in this season of Obi-session?