Interview: 1966 To 1999: The Years Of Military Conspiracy Against Islam In Nigeria – Mallam A. M. Abdullahi

“…Muslim-Muslim ticket that is as irrelevant as its fortuitously tailored against our current national unity aspirations except, of course, somebody else has taken the divine position of God, Allah SWT to determine who’s a true Muslim and who’s not!” 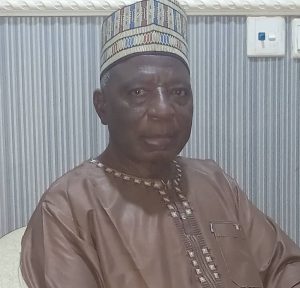 Mallam Abdulkarim Muhammad Abdullahi (AMA) is a very busy man who has little time for relaxation outside his home. A founding member of the CPC branch of the APC, the ruling party, he has been very formidable with his group the Tinubu People’s Network with thousand of youthful followers and zones across the nation. In this interview, Mallam Abdullahi, who is also the Founder and Chairman, of BIG LEAGUE, alias Buhari Integrity Group Advocates and Founder and Chairman, Tinubu Peoples Network-TPN Nationwide bares his mind on the controversy that has trailed the search for a running mate for the APC presidential hopeful, Asiwaju Bola Ahmed Tinubu. Our Editor, Mallam Oyakhamoh Y. Carl-Abu’Bakar was the anchor person. …Excerpts

Pegasus Reporters: What’s your view on Muslim-Muslim tickets being suggested within the APC of which you’re a key player?

AMA: The Muslim-Muslim Ticket is a crafty booby-trap created by ambitiously satanic characters, to stop a Southern Yoruba Muslim majority population from ever becoming a Nigerian President!

As a preamble, I want all Nigerians to take a critical and objective overview of our country’s history since 1966 and try to faithfully interrogate our senses and conscience by analytically making a categorical inquest about our national interests and its dysfunctional tragic catharsis which cause/effects systemic and syndicated syndromes are responsible for Nigeria’s endemic crises and man-made disasters bedevilling our country since our meeting together as an amalgamated constituency!

Pegasus Reporters: So you think the Muslim-Muslim ticket is being touted to deny Tinubu the presidency?

AMA: I believe that the current and irrationally motivated political debates about a Muslim- Muslim Ticket are a fraudulently diversionary digression from the main issues of our country’s fragile unity project.

If the 1966 Coup de tat was regarded as a sectionally and ill-motivated obstacle against the North to disunify the country by some power-drunk secessionists, the current push for a Muslim-Muslim Ticket is equally spearheaded by some Power-block actors from the North to disintegrate the country’s diverse religious plurality by igniting a feudalised and factionalised religious debates. It’s an emotionally provoked and conveniently insulting caveat to back up their mischievously created political platform as a caveat for their hateful conspiracy and spiritually fake campaign of calumny against Yoruba Muslims. It will engender disunity among Hausa Muslims and Christians. It’s a disunity project which conveniently goes pari-passu with the audaciously lingering manifestations of the military coupists 1966 agenda, which ripple effects sequences are manifested, subliminally by the June 12 anti-MKO Abiola saga as well as the #EndSARS# protests Nationwide.

Pegasus Reporters: Who will you in your research blame for this plan which you say is disunifying?

AMA: The sponsors are the godfathers of most of the cast members of the visibly committed pro-OBJ loyalists, who control the Nigerian Governors’Forum and the defacto movers and shakers of the APC.

Therefore, anybody who is truly interested in promoting the 2023 National Peace Project, must demand for forensic probes and investigations of the relationship between the power-hungry agitators and masterminds of the 1966 coup d etat against the North viz-a-vis the 1993 June 12 Saga, the #EndSARS as well as the injuriously ambiguous Muslim-Muslim ticket that is as irrelevant as its fortuitously tailored against our current national unity aspirations except, of course, somebody else has taken the divine position of God, Allah SWT to determine who’s a true Muslim and who’s not!

AMA: Let’s celebrate the freedom of Jagaban Tinubu from the casual bigotry of the Afenifere anti-Muslim crusaders’ in the South as well as the hypocrisy of our power-block advocates against Yoruba Muslims, now arrogantly trending erratically as Muslim-Muslim Ticket, which is as Islamically fraudulent as its spiritually dehumanising and fake!