“A president is not by strength, block, or cement carrying but a thinker who will improve security, education, economy and leave our children and grandchildren enough prosperity. We have what it takes to end banditry and killings”, he said. 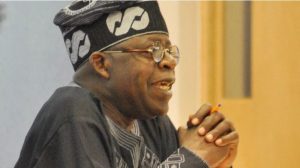 Tinubu stated this when he met with Niger State APC delegates at the Government House Minna, to seek their support to pick the ticket of the party at the Primaries towards the upcoming 2023 General elections.

He said the country is looking for a thinker who will provide the desired leadership for the prosperity of the country.

The former Lagos State Governor and Senator, assures that when voted for, he has a team with the brain to turn around the fortunes of the country.

According to him, he will provide the needed strategy to overcome the security challenges and eliminate the terrorists as well as create a secured Nigeria.

“A president is not by strength, block, or cement carrying but a thinker who will improve security, education, economy and leave our children and grandchildren enough prosperity. We have what it takes to end banditry and killings”, he said.

He added that he wants a Nigeria where quality education for children is guaranteed, jobs created, and a vibrant economy.

The APC National Leader maintains that his track records which include the creation of the Lagos State masterplan, rebranding Lagos economy, and building human capacity have attested that he is the best to lead the Nation.

Asiwaju Tinubu further disclosed that he is not distracted by all that is being said about his health knowing that he is fit and has the intellectual capacity.

He assured that there will be no imposition on the delegates as they will be allowed to vote for whoever they so wished.

Earlier, former Governor of Borno State, Kashim Shettima commended Niger State for adhering to the power-sharing formula in the State.

Shettima described Governor Sani Bello as a man of peace, justice, fairness, and equity, pointing out that the Governor exemplified such attributes before and during the National Convention of the Party.

Shettima said Members of APC and Nigerians owe Tinubu gratitude considering his immense contributions to the formation, growth, and development of the party in particular and the Nation by extension, noting that Tinubu understands the modern economy.