“Clearly, the Quran doesn’t even remotely hint at the death sentence for those blaspheming against it or Islam. But unfortunately, the behaviour of extremist groups claiming to be Muslims and the introduction of the so-called sharia law in some so-called Muslim countries has led the media to wrongly point fingers at the religion of Islam in general”

For the purpose of education, what is the Islamic true position on the desecration of the Quran or blasphemy? According to Sheikh Khalid Saifullah Khan, a person is naturally hurt whenever something he holds sacred is defiled or desecrated. Many consider it morally wrong to hurt the religious sensibilities of others, as it can disturb the peace and harmony of society, whilst others believe any form of censorship curtails necessary freedoms.

Of great concern is the subject of whether Islam prescribes any punishment for blasphemy. Every true Muslim loves and regards the holy prophet more than any human being. A Muslim may tolerate insults against his parents, relatives or friends, but he cannot endure anyone mocking the prophet.

But how exactly does Islam teach a Muslim to respond to insult against the prophet or for that matter, insult directed at God or anything sacred in Islam?

Unfortunately, some Muslims assert that death or other harsh measure is the only possible punishment for those who commit blasphemy.
However, this belief is mistaken and incorrect according to both the Quran and the sunnah of the Prophet Muhammed.

Islam enjoins fair treatment of all, including one’s enemies:

“Let not a people’s enmity incite you to act otherwise than with justice. Be always just, that is nearer to righteousness” (Q 5:9).

Having said this, Islam doesn’t only condemn the blasphemy of God, it also protects the feelings of polytheists, by forbidding Muslims from attacking their idols. On this point, the Quran states:

“And revile not those whom they call upon besides Allah, lest they, out of spite, revile Allah in their ignorance” (Q6:109).

In other words, Islam teaches Muslims to be sensitive to the sensibilities of others-no matter how strongly they disagree with them.

Although Islam regards blasphemy as heinous and offensive, it doesn’t prescribe any worldly punishment for it, as this would seriously restrict freedom of expression.

During this issue, Hadhrat Mirza Tahir Ahmad (1928-2003), the fourth Khalifa of the Ahmadiyya Muslim Community, writes in his book response to contemporary issues:

Blasphemy: Islam goes one step further than other religions in granting man the freedom of speech and expression.

Blasphemy is condemned on moral and ethical grounds, no doubt, but no physical punishment is prescribed for blasphemy in Islam despite the commonly held view in the contemporary world.

He noted that having studied the Quran extensively and repeatedly with deep concentration, I have failed to find a single verse which declares blasphemy to be a crime punishable by man.

There has been no prophet upon whom derogatory words were not used. The Quran confirms that God sent a warner to every people and that each and every one of the prophets has been the subject of mockery.

Yet, despite the fact that the Quran confirms that all prophets have been subjected to attacks by others, there is no evidence that any of the offenders were ever ordered to be punished.

The Quran mentioned many blasphemous utterances by non-believers and hypocrites against Prophet Muhammed, but no sanctioning any physical punishment for the perpetrators:

Verily, those who annoy Allah and His messenger, Allah has cursed them in this world and in the hereafter and has prepared for them an abasing punishment. And those who malign believing men and believing women for what they have not earned shall bear the guilt of calumny and a manifest sin. (Q33: 58-59).

It should be noted that the abasing punishment of blaspheming God and his messenger rests with God alone and it is up to him whether he punishes such person in this world or hereafter.

The authority to punish blasphemers has not been delegated to anyone. Not even the prophet.

Prophet Muhammed was repeatedly mocked by the non-believers. The Quran points out that his opponents claimed he was a madman (Q15:7) and that there is madness in him (Q23:71). 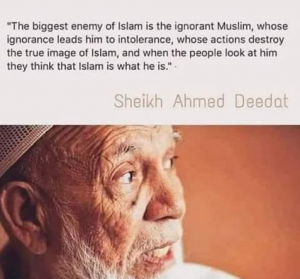 But the blasphemous statement did not stop there. Not only did they make personal attacks on the prophets, but they also insulted the Quran, calling it a book of confused dreams. (Q16:25)

Despite the ill-treatment and disrespect shown to both the prophet and the Quran, Allah instructed him not to retaliate, because God says:

We will, surely, suffice thee against those who mock(Q15:96). In other words, God is sufficient to deal with those who commit blasphemy against him, the holy prophet or the holy book.

The Quran further educate Muslims on what they should do when blasphemy is committed against their religion. Allah says:

“When you hear the sign of Allah being denied and mocked at, sit not with them until they engage in a talk other than that, for, in that case, you would be like them” (Q4:141).

With such beautiful guidance promoted in the Quran, how can anyone contend that the punishment of death for blasphemy is justified in Islam? Sheikh Tahir asked.

Clearly, the Quran doesn’t even remotely hint at the death sentence for those blaspheming against it or Islam. But unfortunately, the behaviour of extremist groups claiming to be Muslims and the introduction of the so-called sharia law in some so-called Muslim countries has led the media to wrongly point fingers at the religion of Islam in general.

The first suppose reason offered in favour of the death penalty for blasphemy is the idea of a person who uses derogatory words against the prophet becomes an apostate and the punishment of the apostate is death.

However, there are many problems with this view. First, it is not correct to contend that a disrespectful word is tantamount to apostasy. The Quran records many derogatory utterances and acts against the prophet and the Quran, yet they were not killed for apostasy.

Moreover, even if blasphemy did equate to apostasy, it is a misconception that the Quran prescribes the death penalty for an apostate. On the contrary, while the Quran speaks repeatedly of those who disbelieve after believing, it doesn’t for once state that they should be killed or punished. The Quran says:

“And whoso from among you turns back from his faith and dies while he is a disbeliever, it is they whose work shall be vain in this world and the next” (Q2:218)

Notice that, this verse doesn’t say that the disbelievers should be killed, rather, it is simply pointing out the fate of the one who dies while having gone back on his faith in isolation.
Another verse also states: “Surely, those who disbelieve after they have believed and then increase in disbelief, their repentance shall not be accepted, and these are they who have gone astray”
(Q3:91)

With the above, it is clear that there is no a single place where Islam prescribes death for blasphemy or even apostasy