“If the classes were open and students are present I will teach. These reckless strikes have done more harm to the system.” 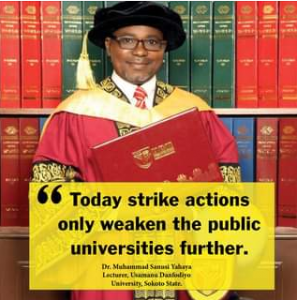 Dr. Muhammad Sanusi Yahaya, a prominent and distinguished senior lecturer at the Usmanu Danfodiyo University Sokoto, one of the universities that is also a victim of the current ASUU strike, has continued to itemize in detail, the adverse effects that the unending strikes are having on public universities.

Despite the criticism by many, the renowned scholar has remained firm in his position and ideology that “Strike is as damaging to the system as lack of government funding, if not more.”

Dr. Sanusi also revealed that the union does not welcome new and working strategies outside strike when he and other colleagues table them during their congresses.

In this journal, Campus Catch NG brings to the public the unique philosophy of Dr. Sanusi as it concerns the continuous strikes by the Academic Staff Union of Universities (ASUU)

“These strikes have become too many and too reckless. The system is bleeding, can’t we see that the politicians of the day are not reliable and just make do with what is available, restrategize and continue the struggle through other ways? The university communities have all been destroyed thanks to these reckless strikes.

We can’t be doing thuggery in the name of unionism. We are as unpatriotic as the other government agents we accuse. Ask around the ASUU caucus doesn’t even allow me to speak during Congress, they come with premeditated ideas that they want to impose on people and so the moment we raise our hands to talk they refuse to allow us to do so. Anyone who uses his brain to think independently is not welcome to speak at Congress. I’m not on strike currently, I always go to work. If the classes were open and students are present I will teach. The only reason why I don’t teach now is that there are no students.

“You may have genuine grievances against the government but you must, as a citizen, study the government of the day, weigh the pros and cons of your actions and see how you can avoid further damage to the system.
1) If people no longer want to attend our public universities when they can afford alternatives not because of the paucity of government funding but because of the uncertainty of our academic calendar occasioned by incessant strikes.
2) If the micro-economies of the university communities die because of frequent closure of the system
3) If young academics on study leave suffer because of strikes and the inability of unions to effectively sponsor the strikes
4) If the youths get demoralised and become resentful for not being able to achieve their dreams because of strikes
5) If young academics who are dedicated to their work of teaching and research get demoralised and resentful because they are pushed into an unplanned strike and are left to be on their own.
If strikes don’t hurt and damage the system what else does?

“If any unionist tells you that you are eligible for salaries and wages during strikes he is only trying to deceive you. The law says the moment you declare a strike (a lawful one for that matter) you are not eligible for salaries, it’s very clear. This is the reason why employees around the world don’t strike for too long. The trade unions are mandated to pay their members during the strike period from what is known as strike fund. Our unions should make arrangements to start doing the same or they should not be eligible for declaring strikes

“You cannot make people the victims of your actions and wonder why they don’t support you. People are not as dumb as you keep thinking

When you realize that the government of the day is not going to be helpful to the university system and you continue to keep them closed under the guise of strikes then you are the actual problem. You are helping them kill the system for good.

“It’s not about being on sides. It’s about doing what we should salvage the system. The system is underfunded by government which makes it weak. These reckless strikes make the system weaker can’t you see that? We have tried this strategy for more than forty years, it has become obsolete and damaging to the system, we must discard it for progress to happen.