In 1993. Nzeribe funded by then head of state, Ibrahim Babangida formed the Association Of Better Nigeria. A group that approached the court to annul the June 12 elections on the basis of rigging and corruption.. the court in the mannerism of the proscription of IPOB, granted their request. 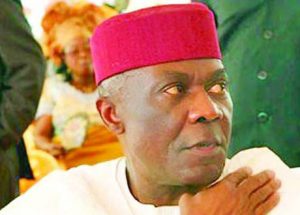 I have seen on various pages, that an iroko has fallen… I really don’t know how you define irokos in your eulogies. But lemme tell you the much I know about him. Nzeribe was an Igbo arms dealer from Oguta in today’s Imo State.

Chief Odumegwu Ojukwu defined him as one of the con men, who trust him and contributed to the fall of Biafra and even the prolonged 30months old civil war. Nzeribe sold arms to both Biafra and Nigerians Forces and when that came to the notice of Dim Emeka Ojukwu. Nzeribe disappeared to Ghana and unfortunately, Ojukwu had nearly emptied the Biafran treasury to him, to help purchase arms for the war.. Biafrans and their forces were dealt a heavy blow of this.

Nzeribe was a key negotiator on the Nigerian side for the Egyptian pilots that bombed Biafra land and worthy of note is that Arthur Nzeribe has traded arms in nearly 100% of all the conflicts in Africa from the 50s- to the 90s. Selling to both sides of the war fronts.

In 1960, Nzeribe worked as a “black market” arms representative of Dr  Kwame Nkrumah but was known to the Ghanaians as his speech writer.. (imagine then, well lesser-educated FAN, writing speeches for Dr Kwame Nkrumah).
After the coup that sent Dr Kwame Nkrumah to Conakry. Nzeribe sneaked back to Ghana to work for the new government that has overthrown his Boss.

In April of 1969. Nzeribe was involved in an illegal arms dealing and bribery scandal that forced Ghana head of state, Joseph Arthur Ankrah to resign. In fact, he was a principal witness against his boss.

Ten years later, JJ Rawlings deported the Nigerian arms mogul for incessant illegal arms dealings, cartel activities and smuggling rings and he quickly found his way to his first-line suppliers and partners in the UK.

He was to later return to Nigeria to open a company, FANS Holdings whose illicit activities nearly crippled the already existing FAN Limited, a cold products and icecream company as the later’s products became a SUSPECT of illegal consignments, especially guns around the globe! 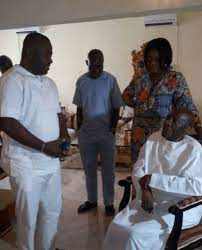 *An ailing Artur Nzeribe before his death

In 1993. Nzeribe funded by then head of state, Ibrahim Babangida formed the Association Of Better Nigeria. A group that approached the court to annul the June 12 elections on the basis of rigging and corruption.. the court in the mannerism of the proscription of IPOB, granted their request.

Nzeribe became senator in 1999 amidst disappearance and unfounded deaths of opposition aspirants and candidates.
At about the year 2000, Nzeribe asked the national assembly to impeach Olusegun Obasanjo based on non resolution of the Sharia law controversy. Stating that it was to the detriment of Muslims!

This flabbergasted the Igbos, his kinsmen who were victims of the Carnage in Kaduna between February 21 and 23, 2000, that the proposed adoption of the Muslim legal regime was pushed by someone from eastern Nigerians while the perpetrators were Muslim fanatics.

In an NTA TV interview, Nzeribe was questioned about his roles in wars in Africa and he said, “I am a businessman.. naa shop I open.. make who get money come to buy!..”

Now.. keep away your PDP vs APC and look into the forest again. The Lamentations Of A Bishop is asking, is this a cash crop or really an iroko!