“Section 9 of the CBN Act of 2007 requires of both the Governor of the Central Bank and his deputies that they “shall devote the whole of their time to the service of the Bank and, while holding office, shall not engage in any full or part-time employment or vocation, whether remunerated or not, except such charitable causes as may be determined by the Board and which do not conflict with or conflict with their full-time duties” 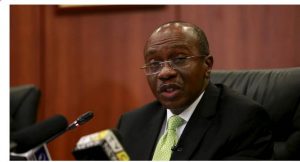 In November 2017, it emerged that the Governor of Nigeria’s Central Bank, Godwin Emefiele, had significant interests in an off-shore company registered in Bermuda, which held an account with UBS in London. UBS is a multinational investment bank and financial services company with its headquarters in Basel and Zurich in Switzerland.

Disclosures released by the International Consortium of Investigative Journalists (ICIJ) in the Paradise Papers revealed that Mr. Emefiele owned 49% of Oviation Asset Management since 2009 and was a director in the company since January 2013.

According to The Guardian newspaper in London, “Oviation was part of a structure that imported two jets via the Isle of Man. The latest purchase, a $50m Gulfstream G550, arrived in November 2015. It replaced a $33m Gulfstream G450, imported in 2013.”

15 months before the import of the second Gulfstream, in June 2014, Mr. Emefiele became the Governor of the Central Bank of Nigeria (CBN). In this capacity, he also leads The Mint, which prints Nigeria’s currency.

Section 9 of the CBN Act of 2007 requires of both the Governor of the Central Bank and his deputies that they “shall devote the whole of their time to the service of the Bank and, while holding office, shall not engage in any full or part-time employment or vocation, whether remunerated or not, except such charitable causes as may be determined by the Board and which do not conflict with or conflict with their full-time duties.”

This prohibition places three constraints on the CBN Governor: one substantive, another procedural, and a third ethical. Substantively, it bars him from moonlighting in any other job or vocation, whether or not remunerated. Procedurally, he needs the approval of the Board of the CBN before taking on any role outside the bank. Implied in this is an obligation of full and honest disclosure on the part of the CBN Governor. As an (additional) ethical standard, the Act precludes the CBN Governor from putting himself in a position that conflicts with his full-time duties.

As the head of a “public corporation” (which the CBN is), Mr. Emefiele, as CBN Governor, is also subject to the Code of Conduct for senior public officers contained in the 5th Schedule to the Nigerian constitution, which imposes on him standards of conduct with reference to asset disclosures, acceptance of gifts and donations, and holding of overseas interests.

For Mr. Emefiele, it seems these standards were ornaments of convenience. Three years into his office as the CBN Governor, his interests in Oviation were still intact. Contacted by The Guardian for an explanation in November 2017, Mr. Emefiele claimed that he “gave instructions for his shares to be handed back” to his former employers, a Nigerian bank, in 2014. For a central banker, this claim shows either a tendency for the cavalier or habit of casuistry. The former puts his professionalism in question and the latter is a question of character.

On or about 4 May, 2022, Mr. Emefiele was a guest of President Muhammadu Buhari in the presidency. The following day, some characters claiming to be armed Niger Delta militants endorsed Mr. Emefiele for the presidential ticket of the ruling All Progressives Congress (APC), promising to lay down their arms if the party were to hand the ticket to him. It is too soon to say whether or not these two developments which appear unrelated have anything to do with what happened next.

Putting months of speculation and hide-and-seek to rest, it emerged on 6 May 2022 that one Rice Farmers Association of Nigeria (RIFAN) and two other shadowy organisations had purchased for Mr. Emefiele forms to run for the presidency on the ticket of APC. His political organization goes by the brand “#Meffy2023”. The following day, 7 May, Mr. Emefiele claimed that he awaits “God’s Divine intervention” which he hoped to receive “in the next few days”.

Mr. Emefiele has been nothing if not consistent in his convenient attitude to rules. As CBN Governor, he has maintained a ruinous regime of multiple exchange rates, sustaining a deliberate scheme of profitable arbitrage which is conducive to cronyism at his discretion and insider abuse. The result is this his version of “Farmers Earnestly Yearn for Emefiele”, (FEYE).

He has got the CBN involved in schemes and scams that almost assuredly violate Section 34 of the CBN Act; from taking over the management of the National Theatre (despite pending litigation) to making himself a willing instrument for the persecution of #EndSARS protesters. Premium Times in a February 21, 2021 editorial fears that his tenure at the CBN will be remembered for having wilfully “shredded” the guardrails in the CBN Act.

In a country where consequences follow malfeasance, Mr. Emefiele will already be in prison. In Nigeria, he longs for the presidency.

The question whether Mr. Emefiele can run for the presidential ticket of a political party while also continuing to serve as the CBN Governor is both moral and legal. Premium Times addressed the former, pointing out that “the operational and administrative autonomy granted the central bank by its enabling statute was precisely to protect the governor from political influence.”

The governor of Ondo State, himself a Senior Advocate of Nigeria (SAN) and former president of the Nigerian Bar Association (NBA), Rotimi Akeredolu, puts it even more pointedly in a release issued on the same day that Mr. Emefiele collected the form to actualize his aspiration: “it is difficult to imagine that a person who occupies the exalted and sensitive office of the Governor of the CBN will be this brazen in actualizing his ambition.”

A partisan politician grubbing for votes while hanging on as CBN Governor messes with more than the statutory independence of the Bank. It is inconceivable that he can retain independence while seeking the presidency. On the same 6 May on which he collected his presidential forms, “news of Emefiele’s presidential bid sent the Naira close to a record low”, confirming that his is no ordinary ambition.

But this is, even more, of a legal issue. To be sure, Mr. Emefiele, as an adult citizen of Nigeria, is entitled to run for any office he desires. Two of his predecessors have preceded him into elective politics. Clement Isong, the second Governor of the CBN from 1967 to 1975 became the first elected governor of old Cross-River State in October 1979. Chukwuma Soludo, who was CBN Governor from 2004 to 2009, is currently serving as the governor of Anambra State, having been elected on 6 November 2021. Both Dr. Isong and Professor Soludo ran for office after the expiration of their terms.

Section 9 of the CBN Act makes it quite clear that the CBN Governor just cannot choose to run for elective office while still holding on to office. In any case, he has to first secure the approval of the CBN Board, which is not the case here. He could, of course, choose to resign in order to pursue his ambition. For this, section 11(3) of the CBN Act requires him to give “at least three months’ notice in writing to the president of his intention to do so.”

So, section 9 of the CBN Act precludes Mr. Emefiele from political activities and section 11(3) requires him to give three months’ notice of resignation. As a matter of law, he should have resigned at least three months before the primaries in which he is to be a contestant. The possibility that such notice from the CBN Governor can be concealed for this long in a political season would require terminal skills in political self-immolation.

But, as with his holding in an offshore company despite being prohibited from doing so, Mr. Emefiele would wish this away as yet another inconsequential encounter with an inconvenient guardrail. The presidency, however, is ultimately about guardrails. As Lincoln is reported to have said and many more since then have shown, it is a test of character.

In pursuit of his audacious project, Mr. Emefiele has not encountered any guardrails which he has not been willing to destroy. For those who wish to turn over to him the keys to the presidency at this time and in this manner, Governor Akeredolu’s words bear repeating: this is a joke taken too far.

In the end, it would appear that Mr. Emefiele is relaxed about having the fate of his ambition decided by a college of Nigerian judges. He carries on with the cockiness of a man who has assured himself that, as the boss of The Mint, he can issue enough notes to buy any number of judges on his march to whatever he fancies. If he ultimately suffers a bloody nose, it’ll be just desserts for a man who clearly believes everything can be bought and sold.

Read Our Preceding Post: The Warped Middle Class In Nigeria And Its Confusing Rhetorics! – By Wale Williams