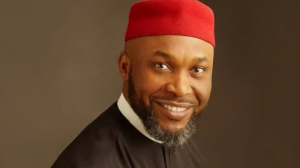 Femi Otedola and Aliko Dangote went to a Driv­ers License Centre (DLC) in Lagos to renew their licenses a few days ago. I saw the pictures online and called Aliko to verify the story. He confirmed it.

I was happy. The reason for my happiness is that this was my goal in revamping the driver’s license. It was not only to provide a secured and verifiable document, but I included the more significant social issue of equality of all Nigerians — the removal of Nkali (superiority) in our soci­ety. The need for physical presence for data capture was a significant issue for me in the brief I gave Price Waterhouse Coopers (PwC), the consultants to the project.

In the past, big men like Femi and Aliko would have sent their staff or drivers to procure the license for them from a DLC at a cost. They would not have appeared in person for data capture or verification. Their presence at the DLC was a good signal and example. I am sure they rarely drive and would not have been stopped for license checks by law enforcement officers. The public show also helps in building a culture of respect for rules.

The first test of my resolve to get everybody to come physically for data capture was the launch of the new Driv­ers License by President Goodluck Jonathan. After agreeing with him to go for the launch, I told his staff that I needed his old license and details for the new license. His villa staff flatly rejected my request, insisting that the president can­not come to my office for a ‘mere’ license, when other bigger agencies come to the villa for data capture.

They said he could only come to launch the license and leave; if I want to issue him a license, I have to come to the villa for the capture and present it to him on the launch day. I quietly left. I was resolute that the data capture at the villa was not on the table, even if it meant the president might not come.

As a young under 40 then and oblivious of the word ‘fear’, I went back to the president with the offer that if he couldn’t come for data capture, it would send wrong signals about the new system. However, I am willing to accept a representa­tive in his stead, though that will reduce the prominence we wanted for the event.

President Jonathan overruled his staff and came to Federal Road Safety Commission (FRSC) headquarters for his license. We paid (I collected the N6,000 from him, he asked his staff to pay) the Federal Capital Territory Vehicle Inspection Office (FCT VIO) and followed through the whole process.

Ten years later, the system is still robust and working, de­spite known challenges. Femi and Aliko collected temporary licenses and will get the permanent cards in about six weeks, if everything works fine.

When rules are enforced, everybody obeys. My team at FRSC and I set out to use technology to limit the discretion­ary powers of officers to bypass the system and benefit from offering elite privileges. We succeeded.

The greatest tragedy of the Buhari administration is in the inability to equalise access for all Nigerians. No Nige­rian leader was equipped like President Buhari in 2015 to restore order in Nigeria. He had a solid support base, a party in control of both Houses, and an unparalleled moral authority to redefine Nigeria.

Sadly under his watch, recruitment to government agen­cies are done without a competitive process. The Bureau for Public Procurement (Due Process office) has become another bureaucracy and checkpoint dampening the vis­ibility around public procurement that was becoming a culture. Nigeria’s elite still move around with mobile policemen and pay scant attention to rules, neither on the roads or other areas of our national life.

A pervading culture of impunity has morphed into a ma­cabre, violent show of superiority. President Buhari’s most significant legacy would have been in restoring law and order in our country. The total demystification and destruc­tion of elite privilege is critical because lawlessness and a sense that there is no consequence for bad behaviour is at the root of the violent rebellion and the widespread cor­ruption in the land.

The president’s pledge to fight corruption would have been impactful if he made it clear that elite privilege is not acceptable. His tenure is a great opportunity lost. He had all the ingredients for creating a new society: a soldier, austere, angry, overthrown from office, suffered electoral defeats many times and old enough not to care.

A missed opportunity, yet we need to restore order in Nigeria. 2023 presents another opportunity.

Read Our Preceding Post:  Video Report: In Anambra, When A Corpse Dared The Living People’s Power