Osun 2022: The Battle Of The Adelekes Escalate As Dele Replies Davido 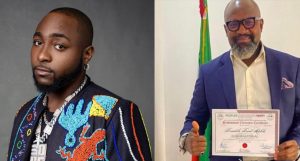 Davido’s cousin, Dele Adeleke has replied the superstar singer after he (Davido) called him out for opting to run against their uncle, Ademola Adeleke in Osun governorship election.

Davido had earlier accused Dele’s “people” of including the death of his mother, Veronica, in an article they released after he (Davido) called him out.

Reacting to the claim on social media, Dele said he will never allow anyone to denigrate Davido’s mother’s memories as he also lost his mother at a tender age.

He alleged that people have taken it upon themselves to write whatever they want, he also claimed that some of the singer’s fans have been sending him death threats.

While insisting that he is not that kind of person Davido is painting him, Dele also said that he has maintained decorum in the face of provocation, stating that he respects the singer’s decision to support their uncle, he added that Osun residents deserve the best and will give the governorship position to the best man.

Dele Adeleke who has shown interest in the Osun guber run has been gathering support among the educated elites of Osun state he since he declared interest to run against his sibling.

Pegasus Reporters: making news that reach your audience|Advertise with us! | Join our readers’ list on Telegram (+234 813 308 8344) Follow us on Twitter @pegasusreporters | We are on Facebook; The PegasusReporters | Chat with the Editor on WhatsApp (+234 815 444 5334) | Contact the Editor or send your articles to pegasusreporters@gmail.com