The group states categorically that anybody running for president henceforth in Nigeria must have a clear-cut plan of how to cater for People With Disabilities, (PWD) and the vulnerable in our society. 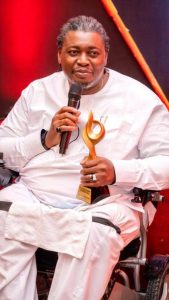 The Convener of the Persons With Disabilities Participation in Politics in Nigeria and the African Democratic Congress (ADC) Deputy National Chairman, Strategy, Innovatiion and Disabilities, Dr. Chike Okogwu, a Spinal Cord Injury Victor, says that the declarations were scornful of Person with Disabilities.

Dr. Okogwu in a singed press statement dated January 17, 2022 and received by PegasusReporters, condemned the declaration to run for the presidency by the APC leader Senator Ahmed Bola Tinubu and Vice President Yemi Osinbajo on the grounds that both declarations did not mention or state categorically what they plan to do for persons with disabilities (PWD) and vulnerable persons in Nigeria.

“Be that as it may, Persons with Disabilities participating in politics have made it clear, far before now that only those who support the cause of persons with disabilities will be supported and therefore, the declaration by the two APC leaders are dead on arrival noting sadly again that, in the past six years of APC leadership, Nigeria has witnessed a huge increase in the numbers of persons with disabilities as a result of motor accidents from bad roads, mental disability from bad economic policies leading to high rate of suicides and ritual murders, injuries from insurgency by women, children and soldiers; economic deprivation of Nigerians by the weaponization of poverty and a whole lot of other things.

The group states categorically that anybody running for president henceforth in Nigeria must have a clear-cut plan of how to cater for People With Disabilities, (PWD) and the vulnerable in our society.

He further pointed out that it is a shame to note that in the 120 page document released by Vice President Yemi Osinbajo that, not one single word on disability was mentioned in the 120 page document and asking if out of a 120 page document, disabilities does not contain 5% as the very act of law signed by President Muhammadu Buhari which will be 3 years old in a few days time and greatly appreciated by the community of PWD. He stressed that, if the content of that act is not visibly articulated in a 120 page document by the vice-president and the leader of the APC both preparing to run for president in their declarations, it then speaks volumes and should tell Nigerians and persons with disabilities not to expect anything from them. Any action now is an afterthought.

The Convener sounded a note of warning to all the presidential aspirants as they all come out to declare their interests in the Presidential seat that, persons with disabilities will not be neglected anymore. We are saying enough is enough and are mobilising to use this 2023 general elections and the two elections before them to show that the days of neglecting persons with disabilities are over.