House of Oduduwa: Why Naomi May Never Return to Ife as Ooni’s Queen

Investigation according to the report indicated that traditional rites of cleansing which involved washing off all her footprint and sucking out her voice notes from the atmosphere of the palace has been spiritually carried out in the cozy Ooni palace. 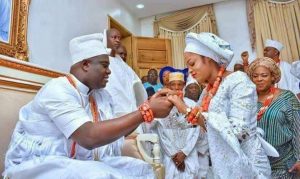 Arising from speculations that estranged Queen Naomi Silekunola is returning to the palace she unanimously abandoned penultimate week, factchecker, an online investigative forum says it has uncovered that a traditional cleansing off Naomi’s steps and aura from the Ooni of Ife palace and vicinity has been spiritually carried out.

If this was true, it means, traditionally that the queen has been formally divorced by the revered king sealing and killing the hope of Naomi’s return to the palace as the Queen of the House of Oduduwa in Il-Ife.

Investigation according to the report indicated that traditional rites of cleansing which involved washing off all her footprint and sucking out her voice notes from the atmosphere of the palace has been spiritually carried out in the cozy Ooni palace.

The consequence of this rite is to ensure that Naomi’s flame will never rise or ever spiral in Ife Royalty either in this world and the world to come.

The bare fact is that Naomi’s masquerade will never showcase or rare its head as the Queen of Ooni of Ife but just the mother of Ooni Ife’s Prince mother .

In a related instance, Factcheckers however said it’s unhappy by the insensitivity of Moses Olafare Ooni’s Director of Media, who has refused to engage the media but rather keeping mum or burying his head like an ostrich in the sand, while Naomi is trying to dent the image of the Aarole Oduduwa .

It also revealed that there was never a time any Ife Chiefs or any palace emissary went to Akure to join in an imaginary reconciliation move putting to rest the news items relating to Naomi’s returning to Ife as the Queen of His Imperial Majesty Oba Adeyeye Enitan Ogunwusi, Ojaja II are nothing but dark lies and contraption of falsehood.

“She has renounced being a Queen of the highest order in Yorubaland. Thus she shall be till heaven come‘ the source told Factchecker..