“Let’s face the fact, God sometimes use some persons, even ordinary members of the church can be the vehicle of revelation. but what we have now is 419 prophesies all over the year at targeted big men and politicians in the country” 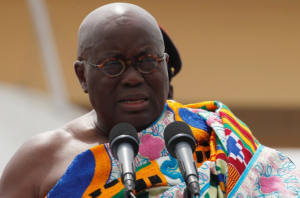 Recently, and following from endless apocalyptic messages and prophesies usually made by many clerics who claim the hear from God, the Ghanaian police service has warned that religious groups and leaders who give fake prophesies, rumour mongers without evidence will attract jail term of up to five years.

In a statement the past week by the Director of Public Affairs, Superintendent. Alexander Kwaku Obeng, the service said even though it is not against prophecies but any communication that will be injurious to the country will not be tolerated.

Below is the statement:

1. As the year 2021 draws to a close, the Ghana Police Service wishes to draw the attention of Ghanaians, especially religious groups, to the fact that whereas we have the right to religion, freedom of worship and free speech, all of these rights are subject to the respect for the rights and freedoms of others according to our laws.

2. Over the years, communication of prophesies of harm, danger and death, by some religious leaders, have created tension and panic in the Ghanaian society and put the lives of many people in fear and danger.

4. It is also a crime for a person, by means of electronic communications service, to knowingly send a communication that is false or misleading and likely to prejudice the efficiency of life saving service or to endanger the safety of any person.

5. A person found guilty under these laws could be liable to a term of imprisonment of up to five years.

6. We therefore wish to caution all Ghanaians, especially religious groups and leaders to be measured in their utterances, especially how they communicate prophecies, which may injure the right of others and the public interest.

7. The Ghana Police Service wishes to place on record that the Police are not against prophecies; we acknowledge that we Ghanaians are a religious people who know, and believe in, the centrality of God in our lives.

8. The Police wish to assure all religious organizations that we are committed to ensuring maximum security during the 31st December night, end of year services and beyond. There should be no apprehensions therefore about undertaking the various activities. We ask only that everyone keeps within the law and is mindful of the welfare of each other.

9. We also urge all Ghanaians to observe the COVID-19 protocols religiously so as to protect ourselves, families and friends from this ravaging pandemic.

10. We also take this opportunity to wish all Ghanaians a Merry Christmas and a happy New Year.

Reacting to this news when PegasusReporter spoke with an anonymous cleric of the orthodox calling, he said that it’s not untrue that God can reveal certain messages to son anointed men of God, but that this is been abused and used to attract patronage from targeted personages.

“Let’s face the fact, God sometimes use some persons, even ordinary members of the church can be the vehicle of revelation. but what we have now is 419 prophesies all over the year at targeted big men and politicians in the country”

“When this happen, the targeted individual is force to go to the so-call prophet to find out what can be done to stop the calamity. Do you think that they are attended to without money changing hand? Was this the tradition in the Bible? I think our government should follow the route taken by Ghana and hold whoever calls himself a seer responsible for what they tell the public”

Reminded that some prophesies have been known to come to pass, the cleric who simply want to be referred to in this post as reverend, as PegasusReporters correspondent; “if I tell you that a minister will be sacked this year, and truly a minister is sacked, so you’ll think its because I saw it? Is there a year in the life of a president or a governor that a minister of commissioner will not be removed for one reason or the other? This is the 419 aspect of such guesses called prophesy. When a true prophet gets a message from God, if its about a calamity befalling, he should also be told what’s to be done to forestall the calamity”

“Go and read about the prophesies in the Bible. They were warning of dare consequences and what’s to be done to avoid them”

Recalled that a prominent Nigerian cleric is currently embroiled in a media war with government functionaries over prophesies that the former said are fake and bounced except in interpretation according to the cleric or his aids.

Pegasus Reporters: making news that reach your audience|Advertise with us! | Join our readers’ list on Telegram (+234 813 308 8344) Follow us on Twitter @pegasusreporters | We are on Facebook; The PegasusReporters | Chat with the Editor on WhatsApp (+234 815 444 5334) |Contact the Editor or send your articles to pegasusreporters@gmail.com