Albert Bourla of Pfizer Is CNN Business CEO of the Year, Shares Thoughts On Boosters And The Future Of Covid 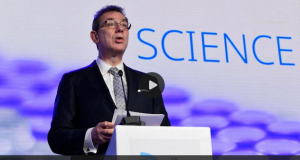 New York (CNN Business) The Covid-19 pandemic is far from over. But life in many ways has returned to something resembling normal for many. That’s in large part because there are now multiple coronavirus vaccines, including one from Pfizer.

*Pfizer CEO Albert Bourla talks during a press conference with European Commission President after a visit to oversee the production of the Pfizer-BioNtech Covid-19 vaccine at the factory of US pharmaceutical company Pfizer, in Puurs, on April 23, 2021.

Pfizer CEO Albert Bourla talks during a press conference with European Commission President after a visit to oversee the production of the Pfizer-BioNtech Covid-19 vaccine at the factory of US pharmaceutical company Pfizer, in Puurs, on April 23, 2021.

But Bourla was our choice for all that Pfizer has done in a year where Covid vaccines went mainstream (vaccine was even named word of the year by Merriam-Webster) and helped stabilize America’s economy — and the world’s for that matter.

“Pfizer did a lot of good [for] humanity and we are very, very proud of it,” Bourla said in an interview with CNN Business. “Not only were we able to save so many lives … but we are enjoying high levels of corporate reputation right now. People like us.”
Hoping to get Covid pill approved in early 2022

Pfizer isn’t the only company that has developed a vaccine. But the Big Pharma leader, even more so than its European partner BioNTech (BNTX) or rival vaccine developer Moderna (MRNA), has become synonymous with the fight against Covid.

The Pfizer/BioNTech vaccine was the first approved in the United States for 5- to 11-year old kids. But many parents of even younger children are now waiting to hear about when a vaccine might be approved for babies, toddlers and pre-schoolers. 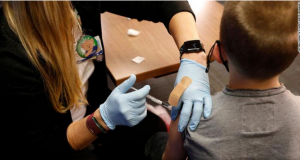 *A 8 year-old child receives their first dose of the Pfizer Covid-19 vaccine at the Beaumont Health offices in Southfield, Michigan on November 5, 2021.

Bourla said he understands the frustration of parents who are fully vaccinated but cannot get their youngest kids protected.

“We’re working very intensively on that to make sure we can bring a solution for that,” Bourla said.

“We are looking at different doses, well below the doses that have been used [for adults and older kids.] We know that it will be safe. What we are looking to see is if that will protect them by giving the lower dose,” he added.

But Pfizer announced after the interview with CNN Business took place that it is still evaluating whether three smaller doses of its vaccine will be effective for kids under 5 after finding two child-sized doses were not producing the expected immunity in 2- to 5-year-olds.

In addition, Pfizer has developed a pill that could drastically reduce the risk of severe complications, hospitalization and death for people who contract the virus. The Food and Drug Administration announced following the interview with Bourla that it had approved Pfizer’s Paxlovid oral treatment. But Bourla stressed to CNN Business that the pill is not meant to be a substitute for the vaccine.

Ready to launch an Omicron-specific vaccine if needed

The recent rise of the Omicron variant has created concerns around the globe about the efficacy of the current vaccines. But Bourla told CNN Business that he believes its and BioNTech’s vaccine will control Omicron “quite well,” especially if people have received two doses and the booster.

He conceded, however, that it is possible Pfizer will need to launch a new vaccine to specifically target Omicron or any other future variants. Bourla said Pfizer is already developing a shot aimed at Omicron, and that he believes it could be tested and submitted to regulators for approval by March.

If Pfizer needs to produce Omicron-specific shots, that will not slow the manufacturing of the existing vaccine, Bourla said. 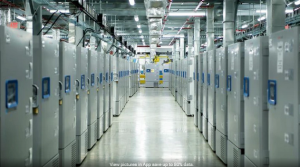 *A freezer farm for Covid-19 vaccines at the Pfizer Kalamazoo Manufacturing site on February 19, 2021, in Portage, Michigan.

“We are aiming for a four billion [dose] annual manufacturing capacity of our current vaccine. And if we have to switch between the two, the old and the new, we still will make four billion. We don’t expect that we will lose any volume,” he said.

Bourla also acknowledged that there are cynics who question whether Pfizer is just trying to make as much money as possible from the vaccine.

*Vials of the Pfizer-BioNTech Covid-19 vaccine during a vaccination event at Manning High School in Manning, South Carolina, on Friday, March 12, 2021.

Bourla told CNN Business that it is charging poorer, developing nations less for the vaccine than it does to wealthier countries. But cost isn’t the only challenge. He said some countries, such as those in remote parts of Africa, are “lacking basic infrastructure.”

Bourla is hopeful the World Health Organization and the public-private vaccine alliance Gavi will be able to help resolve some of these issues. He also said the company is looking into drone delivery more to ensure that people get the vaccine more quickly.

“We are doing everything we can to find ourselves on the right [side] of history,” he said.

Bourla also continued to stress that the vaccine is safe and that the only way for life to return to normal is for people to get the shots.

“I don’t see any reason why next year will not be a normal year if we do the simple things that are available for us,” Bourla said. “If we have very big numbers of people that don’t want to do a third dose or don’t want to vaccinate at all, that’s a problem.”

Pfizer and Bourla aren’t resting on their laurels. The company has also been at the forefront of developing many other promising blockbuster drugs such as blood thinner Eliquis, breast cancer treatment Ibrance and rheumatoid arthritis pill Xeljanz, as well as the Prevnar family of pneumonia vaccines.

Bourla is fully aware that for a drug company to remain successful, it has to have even more promising drugs in the pipeline.

Several of Pfizer’s current top sellers are due to lose patent protection in the next few years. Once they expire, that opens the door for cheaper generic drugs to compete with them.

“It’s challenging to multitask,” Bourla said. “But let’s not forget what else we are working on. There are so many medicines for cancer, for other infectious diseases, for cardiovascular diseases, for other diseases.”

“We are heavily invested right now in cancer,” Bourla added. “The biggest percentage of our R&D investment goes into oncology right now.”

Investors have rewarded Pfizer, which ironically enough was booted from the venerable Dow Jones Industrial Average in 2020 just a few months before its vaccine was approved. Shares are up nearly 65% in 2021 — more than any Dow stock — and are not far from a record high.