Two Decades Of Injustice: What Are The Implications On Nigeria Democracy? By Chief Adeniyi Akintola

BEING A PAPER DELIVERED BY: CHIEF ADENIYI AKINTOLA SAN, FCIArb AT THE 20TH YEAR BOLA IGE MEMORIAL SYMPOSIUM HOLDEN IN LAGOS ON TUESDAY, THE 21ST OF DECEMBER, 2021 ON THE TOPIC: 2 DECADES OF INJUSTICE: WHAT ARE THE IMPLICATIONS ON NIGERIAN DEMOCRACY? 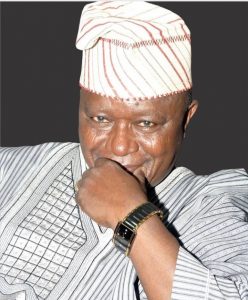 It gives a great pleasure and a rare privilege to be here this afternoon. My presentation will be centered on the implication of Two (2) decades of injustice on the Nigerian democracy with particular reference to the gruesome assassination of our revered father, leader, mentor and benefactor; Chief James, Ajibola Ige SAN. 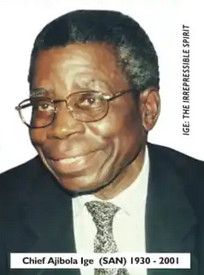 WHO WAS CHIEF BOLA IGE SAN?
The Late Chief J.A Ige was born in Esa Oke, Osun State on the 13th day of September, 1930. He was a distinguished Legal practitioner, an astute politician, a prolific writer and an uncommon advocate for civil rights and democracy in Nigeria. Bola Ige established his law firm known as Bola Ige & Co in the year 1961 and was later admitted into in Inner Bar. Between the year 1967 and 1970, Chief Bola Ige was a Commissioner for Agriculture in the now defunct Western Region of Nigeria under the military government of General Yakubu Gowon. In 1967, he became a friend of General Olusegun Obasanjo GCFR, who was then a commander of the army brigade in Ibadan where they both served as members of the Executive Council of the state under General Adeyinka Adebayo of blessed memory. In the early 1970s, during the first period of military rule, he devoted his time to the anti-racism campaign of the World Council of Churches. Towards the end of the 1970, he joined the Unity Party of Nigeria (UPN); the successor to the Action Group.

During the First Republic (1963–66) when Chief Obafemi Awolowo was pitted against his deputy, Chief Samuel Ladoke Akintola, the Late Chief Bola Ige was at the centre of the Action Group crisis. However, when General Olusegun Obasanjo initiated the Second Republic, Chief Bola Ige SAN was elected as governor of Oyo State from October 1979 to October 1983. After the military coups staged by the then military leaders in Nigeria in December 1983, Chief Bola Ige SAN was accused of enriching himself with party funds and was subsequently detained along side other political actors in the then old Oyo State. In 1985 however, he was released and he went back to his legal practice.

With the restoration of democracy in 1999, Chief Bola Ige sought the nomination of the Alliance for Democracy party as its presidential candidate, but same was denied by the element aptly tagged ‘fathers of apostasy’ by no less a personality, my teacher and revered Senior Advocate of Nigeria, Prof. Itse Sagay following the despicable display at De’rovans Hotel in Ibadan. President Obasanjo appointed Ige as minister of Mines and Power between 1999–2000. During his life time, Chief Bola Ige served as Minister of Justice and Attorney General of the Federal Republic of Nigeria between the year 2000 and 2001. He was one of Nigeria most cleared minded voices of conscience – the voice of the debased, the betrayed and the dehumanized when he was alive. Worthy of note is the fact that Bola Ige was an alumni of the only University, the University of Ibadan and he spoke Yoruba, Ibo, Hausa and TIV languages fluently.

It is on record that the Late Chief Bola Ige was about to take up a new position as a member of the United Nations International Law Commission when the realization of same was cut short. On December 23, 2001, (20 years ago), Chief Bola Ige was shot dead in Ibadan, the Oyo State Capital. The Nation’s Chief Law Officer’s life was terminated. The said killing has been associated with a lot of political beefing which goes a long was to show that Nigerian politics isn’t only disgusting but also barbaric.

It’s been 20 years since the death of Late Chief Bola Ige and the mystery surrounding his death is yet to be unraveled. Both the rulers and the ruled have been playing the Ostrich. This presupposes the existence of serious problems in this Country which require urgent government attention. It is on record that series of arrestd were made but nothing came out from the prosecution of the alleged perpetrators of the crime. Although various people were arrested and tried for involvement in the murder but all were acquitted no thanks to the shoddy investigations purportedly carried out by the Nigerian Police and their political commanders as well as the Nigerian factor. Up till date, I still find it difficult to believe that Chief Bola Ige could be dealt with in such a manner by the system and country he fought hard to liberate from the shackles of military dictatorship.

Whenever I drive pass his office which is about 3 blocks away from mine in Ibadan, series of unanswered questions flood my mind. Why was he killed? Who Killed Him? Why is it difficult to find his killers? Why is it difficult to bring his killers to book? How did our state of security degenerate to this level? What is the fate of the common man in this Country? Why has it been difficult for the past and present civilian/democratic governments to deploy resources to find Bola Ige’s killers twenty years after? These and many more questions trouble my mind and leave me in a perpetual state of confusion. His assassination in his home at Bodija, Ibadan was definately the climax of assassinations in Nigeria and Africa as a whole and the foundation for various security challenges that we as a nation have been confronting since then and till this day.

The wife of Late Bola Ige, My Lord, Hon. Justice Atinuke Ige (Justice of the Court of Appeal) upon being informed about the death of her husband broke down and screamed: Is this how my Bola will be treated? It was a pain too much to bear for her. She could not live to continue to watch the horrendous drama and despicable dance of shame before her very eyes. She joined the saints triumphant 16 months after the gruesome murder of her beloved husband, our father, mentor, benefactor and a dugged fighter who with the kind permission of my sister Mrs Funsho Adegbola (Nee Ige) gave many of us the wings to fly.

Ladies and gentle men, the truth of the matter is that there must be closure for the immediate and political family of Late Chief Bola Ige. Any right thinking government would deploy machineries to unravel the mysterious killing/assassination of Chief Bola Ige and that of other Citizens whose lives were gruesomely taken. Our joint refusal to so do will forever leave a dent in the history of this country. 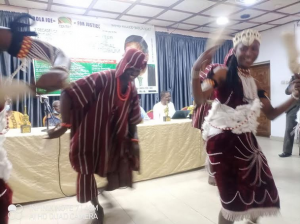 Cultural performance at during the symposium

GENERAL IMPLICATIONS
Most often than not, we find that there is always the recurring lack of political will to hold the perpetrators of these heinous crimes accountable despite our claim of being a democratic country. Nigeria has continued to, at an alarming rate too suffer human rights violations resulting from security challenges, youth unemployment, poverty and decaying judicial system. These violations include kidnappings, assassinations, extra-judicial killings, injustice, rape, violence, inequalities, inhuman and degrading treatment, discrimination and above all, impunity, weak institutions and lack of political will to hold perpetrators accountable. Most of the problems associated with successfully practising a constitutional democracy in Nigeria bother on the unfortunate deviance from practising the rule of law which basically states that no one is above the law. Insecurity is unarguably the greatest threat to Nigeria nascent democracy. In the southern part of Nigeria, there is the menace of kidnapping for ransom and armed robbery. Several lives have been lost in the process. In the northern part of the country too, there is the problem of a mindless religious sect that has wasted several lives and destroyed property worth billions of Naira. Insecurity is capable of shaking the corporate existence of our nation. Anyone in doubt should go through the Vanguard of yesterday with the headline ‘WE CAN END INSECURITY WITHIN SIX MONTHS’ at pages 5 and 35 credited to General Magoro. No one could have painted the solid picture better and in fairness to him, the elder statesman suggested serious solutions on how to combat the menace of insecurity in the Country.

Let me leave us with this poser. Is it possible that Nigeria in the 21st century will sweep the murder of its former Attorney General and Minister of justice under the carpet? From my end, I SAY, GOD FORBID!

Thank you all for your attention.