“Meanwhile, it is a rude shock that the learned silk just discovered his alleged “illegality” of the Panel over a year since it was constituted up till the point that it submitted its reports. This sudden attack on the legal validity of the panel is strange and quite suspicious.” 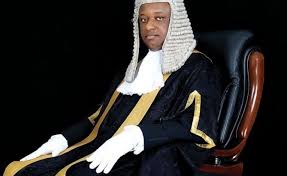 Festus Keyamo SAN, a minister of the federal republic serving the current government of President Muhammadu Buhari had in a personal view currently trending in the media, pooh-pooh the Lagos State EndSARS panel as illegal. In this reaction, Barrister Festus Ogun, Esq, attempts to deflate the statement of the learned Senior advocate of Nigeria. It’s an interesting read. …Editor

On Sunday, Festus Keyamo, Minister of State for Labour and Employment, said the Lagos Judicial Panel of Inquiry on Restitution for Victim of SARS Related Abuses and Other Matters was “illegal and a waste of time” on the ground that the Lagos State government lacks the power to probe the conduct of police and military officers.

With due respect, the position of the learned Senior Advocate of Nigeria (SAN) is grossly misconceived, suspiciously misleading and does not reflect the true position of the law. The Lagos EndSARS panel was constituted within the ambits of law and its investigative powers are neither overreaching nor beyond the scope of the 1999 Constitution.

First, Section 1 of the Tribunal of Inquiry Law, Cap T7, Laws of Lagos State, 2015, confers power on the Governor of Lagos State to constitute the judicial panel to investigate “any matter in respect of which in the opinion an inquiry would be for the public welfare”. Instructively, it is settled law that the Federal Government lacks the power and authority to constitute judicial panels or any tribunal whatsoever for state governments. With a clear understanding that the Federal Government lacks the constitutional vires to constitute tribunal for states, the National Economic Council, NEC, last year directed the immediate establishment of State-based Judicial Panels of Inquiry to investigate complaints of police brutality or related extrajudicial killings with a view to delivering justice for all victims of the dissolved Special Anti-Robbery Squads (SARS) and other police units.

In the popular case of Fawehinmi v. Babangida (2003) 3 NWLR (Pt.808) 604, the Supreme Court succinctly held that: “The National Assembly cannot enact a general Law for the establishment of tribunals of inquiry for, and applicable in, the Federation of Nigeria. The power to enact such a Law has become a residual matter for the States in respect of which the Houses of Assembly can legislate for their respective States by virtue of Section 4(7)(a) of the 1999 Constitution. Although the Tribunals of Inquiry Act is an “existing law,” its application is limited and has no general application”. Flowing from the decision of Supreme Court, it is clear like crystal that the Federal Government of Nigeria can only set up Tribunal for the Federal Capital Territory, Abuja and not for States of the federation.

It is not in doubt that matters relating to the police and other security agencies established by law are on the exclusive legislative list. It is equally not a subject of controversy that Section 21 of the Tribunal of Inquiry Law of Lagos State empowers the Governor to exercise his powers under the Law in respect of matters within the legislative competence of the state. My only question is whether issues of human rights are within the legislative competence of state governments and whether the panels so constituted can look into the atrocities and human rights violations committed by the police and other security agencies?

In AG Abia State v. AG Federation (2006) 16 NWLR (Pt. 1005) 265, the Supreme Court clarified that matters not included in the exclusive and concurrent lists are residual and are meant for the State, not the Federal, to legislate upon. Human rights related matters are neither on the exclusive or concurrent lists, therefore, they are within the legislative competence of Lagos state. Thus, the Lagos State government can validly make laws in respect of human rights and constitute panels to investigate cases of human rights violations recorded within the state.

Meanwhile, it is a rude shock that the learned silk just discovered his alleged “illegality” of the Panel over a year since it was constituted up till the point that it submitted its reports. This sudden attack on the legal validity of the panel is strange and quite suspicious. One wonders if the Honourable Minister would have maintained the same position if the Panel reports and recommendations absolved the Federal Government of any wrongdoing. I daresay that the opinion of the Honourable Minister is calculated to discredit the valid reports of the panel. Too late! The truth is in the open and no attempt to thwart the genuine efforts of the EndSARS panel will succeed.

In the light of the foregoing, I call on well-meaning Nigerians to disregard the views of Mr. Keyamo as it is grossly misleading, made in bad faith and calculated to distract the incontrovertible fact that Nigeria is currently ruled by merchants of death.