A source revealed that a lady recently paid a million dollar as down payment for the penthouse. Many other prominent government officials especially in the Lagos State government circuit are currently ruing their humongous loss. 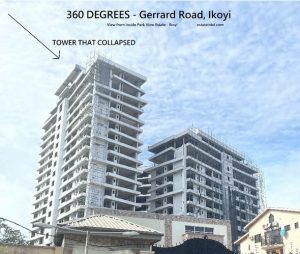 72 hours ago, the eye-popping three units of 21-Storey blocks of luxury apartments on Gerrard Road, Ikoyi, which, even at its incomplete stage, stood out in its mammoth and magnificent glory, was the stuff of every commuter and passerby’s dreamed off.

By noon, Monday, November 1, one of the three towers in 360 Degrees otherwise known as Luxury in the Sky , was reduced to mere rubble, burying in its bowels hapless lives and shattering the dreams of many wealthy Nigerians who had broken the banks to acquire the apartments. Gone with the building also are millions of dollars already paid by those desirous of premium luxury living in the project, which offered a mix of 3-bed and 4-bed apartments including maisonettes and penthouses.

360 Degrees Towers is a 63 apartments-unit residential project by Fourscore Heights Limited owned by Femi Osibona, a real estate investor with a large portfolio of luxury properties across Nigeria, South Africa, the U.A.E, UK, and the U.S.A.

Osibona said in a dated interview, “What we want to achieve is to have people live in their homes as if they’re living in a 7-star hotel. There is security with access control from the entrance on Gerald Road and there is another security post when coming into the buildings. Electricity will be guaranteed 24 hours a day and there will be cleaning and gardening around the estate, as well as housekeeping/ concierge services for those who desire it.”

Osibona had, indeed, collected over $250m from interested buyers who looked forward to living “a stress-free lifestyle, complete with a hotel flair” as promised by Fourscore Heights Limited in a client brochure.

Sources said Governor Babajide Olushola Sanwo-Olu his Deputy Obafemi Hamzart and a host of other public officers in Lagos State equally subscribed to the project.

A source revealed that a lady recently paid a million dollar as down payment for the penthouse. Many other prominent government officials especially in the Lagos State government circuit are currently ruing their humongous loss.

Osibona, popularly known as Femi Fourscore, was said to be in the building at the time of the collapse. Whether dead or alive, his body has yet to be recovered.

However, many people who are privy to Osibona’s modus operandi have no pity whatsoever for him. He has widely been criticised for his greed and predilection for cutting corners. It was gathered that the project was originally supposed to be on eight-storeys, but that Osibona increased it to 15 and later, 21.

The now suspended Arc. Gbolahan Oki, General Manager, Lagos State Building Control Agency (LASBCA), confirmed this, adding, “He got an approval for a 15-storey building and he exceeded his limit. I am on the ground here and the materials he used are so inferior and terrible. The materials he used, the reinforcement, are so terrible. He got approval for 15 floors but built 21.”

Meanwhile, before Monday’s unfortunate collapse, which has so far claimed about 14 lives, the Lagos State government had sealed the building for ostensibly bypassing procedural approvals from the state government and other authorities vested with the mandate to ensure compliance with standards and quality. How the Mayflower School Ikenne alumnus managed to get his site reopened calls for investigation.

Concerned Nigerians are saying that for tragically enabling the death of ordinary Nigerians eking out their living on the site, if Osibona a Pastor was fortunate to be rescued, he should face the full wrath of the law for criminal negligence, fraud and murder.

Read Our preceding Post:  Video Report: Late Osibona Prayed Over the Collapse Building A Day Before The Accident