“We are doing this at the local level in order for the federal and Lagos State governments to see the potential and tap into it”. 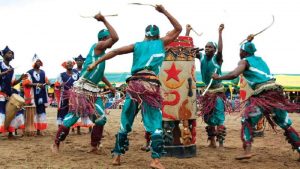 Africa Renaissance Foundation (AREFO), a non-governmental organisation, has urged the Lagos State and federal government to tap into the Badagry Diaspora Festival (BDF) to boost cultural tourism in the state.

Africa Renaissance Foundation (AREFO), a non-governmental organisation, has urged the Lagos State and federal government to tap into the Badagry Diaspora Festival (BDF) to boost cultural tourism in the state.

Babatunde Mesewaku, the President of AREFO and organiser of the festival, made the appeal on Sunday at the 2021 edition of the Badagry Diaspora Festival in Badagry.

Newsmen report that the festival was held at the Palace of Akran of Badagry, Aholu Menu Toyi 1.

Mr Mesewaku said the festival was organised to show the world that Badagry was blessed with a different culture, heritage, and history.

“Culture and festival are products of tourism, if one wants to develop tourism especially in Lagos State, cultural tourism is the key and this is what we are doing in Badagry.

“We are doing this at the local level in order for the federal and Lagos State governments to see the potential and tap into it.

“Badagry people contribute money for the celebration of the festival yearly because of the importance they attach to the preservation of cultural heritage compare to other places,” he said.

“The festival came into existence as the awareness of our cultural and historical significance to the global world. We realised that in the past during the slave trade, various global communities like Dutch, English, Brazilian, French, and Portuguese were all in Badagry involved in the slave trade business.

“They were in close commercial collaboration with Badagry people especially the quarters in the town. So, we realised that it is important for us to explore the historical significance of this to Badagry and the world.

“Badagry, being an ancient port, a market for sales and transportation of slave, we decided to explore the importance of this legacy and make good out of it,” he said.

He said that the festival is an avenue for Africans in the Diaspora to come and experience their culture, tradition and then reconstruct their history and identity.

According to him, the festival has shown that Badagry is a port of culture significant for Nigeria and for the Diaspora too.

“We have over eight quarters here in Badagry with different cultural outfits, so if the Diaspora people come to us they will see varieties of the cultural heritage of Badagry,” he said

In his remarks, the Akran of Badagry, Aholu Menu Toyi 1, urged the people to ensure the festival becomes a global festival.

He urged residents to support the organisers of the festival in order to keep the 20-year-old festival alive.

The Akran commended the Arewas, Ndigbo, and other tribes who came to celebrate the festival with them.

The festival began its humble beginnings in 1999, as a remembrance of the slave trade era and the significance of the town in the era. In 1999, AREFO organized the first Badagry Festival. Throughout the years, AREFO has spent hundreds of hours organizing the festival and has been instrumental in evolving it into the festival that we know today.