“All hands must be on deck to ensure that scenarios where looted funds are stashed either at home or abroad only to be used when it is time for political campaigns and elections is reduced to its barest minimum,” 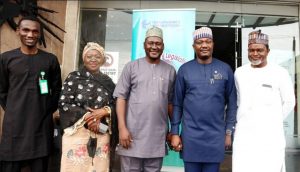 “Our laws are not enforced or are out rightly ignored. According to the widely shared public opinion, political contests have little to do with ideas but rather corruption and populism take the upper hand.”

“These crises of the image of Nigerian politics have led to a widely disillusioned public electorate, which expects profiting from the corruption instead of trying to stop it.

“Although there was a crisis at the leadership of the country, the people are equally guilty.

“Citing the 2019 general elections, he said over one-quarter of voters came to the ballot box with the offer to sell their votes to the highest bidder.

“We all know the problem International Finance Facility (IFF) causes and as CSOs working around the themes of money laundering there is the need to call out the wrongdoings of the government as well as commend the government when they are taking the right actions.

“Doing this will greatly reduce IFF in Nigeria and you agree with me that with the high rate of borrowing, it is important for us to block these leakages.

“All hands must be on deck to ensure that scenarios where looted funds are stashed either at home or abroad only to be used when it is time for political campaigns and elections is reduced to its barest minimum,” he said.

Rafsanjani said that the SANCUS project plans to advocate for the operational independence of anti-corruption agencies, increased enforcement of existing anti-money laundering provisions and policies, and an improved oversight function of the National Assembly.

On his part, representative of Nigerian Financial Intelligence Unit (NFIU), Moses Azege noted that non-state actors play a unique role in supporting state actors in ways that result in more effectiveness in our democratic efforts.

Azege said that these kinds of collaborations result in innovative concepts like the theme of SANCUS Nigeria Project, “which is to address the issue of dirty money in Nigeria politics.

“This initiative could not be more timely bearing in mind that we are about to begin another electioneering process.

“And we know that electioneering is expensive on the ordinary Nigerian because more corrupt proceeds tend to flow into the electioneering space,” he said.

Azege concluded that corruption was not just a threat in itself but an enabler of other illicit conducts.

CISLAC Policy Consultant, Vaclav Prusa who spoke virtually said that the institutions of government should be built in a way that, in fighting dirty money in politics, there would be nowhere for the culprits to hide.

He said that it should be built in a way that there would be no secrecy of jurisdiction, no anonymous companies, every company must be clearly identified and their owners known, just like the idea of hiding under cryptocurrency to perpetrate the act should not be allowed.

Timothy Melaye, of Inter-Governmental Action Against Money Laundering in West Africa (GIABA), noted that Nigeria loses billions of dollars as a result of money laundering activities.

He likewise urged that individuals holding public office positions should refuse to accept bribes and partake in corrupt activities.

According to him, we don’t want dirty money in politics and whatever clean money we have in, it should be controlled.

“Dirty money should not be reduced. It should be out,” he said.

Melaye said if one loses integrity, there was nothing more to lose.

He said if dirty money was not stopped from coming into politics, owners of the dirty money will be the ones that would win elections and rule over everyone.