The truth from available data is that between Chad, Niger, Cameroon, Togo and Benin Republic, our close neighbours, the cumulative daily petrol consumption in these countries are not more than 8.6million litres. 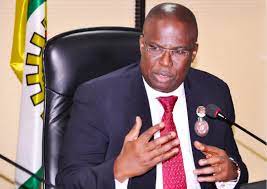 To say that those running this present administration are a walking disappointment is an understatement. Let’s be very clear on this. It grieves me to say this but it grieves me even more that it is not untrue.

What has happened to the greater Nigerians as a people of bold disposition? Even those who were hitherto vocal and fiery in taking on previous governments on perceived misdeeds have all gone deaf, dumb and blind? Is the country under some spells?

The announcement of the billions of Dollars contracts for the rehabilitation the nation’s three dead refineries in Port Harcourt, Warri and Kaduna would have been greeted with wild applause but for the obvious aberration that our country is being misruled with such brazen impunity, gross insensitivity and outright arrogance by a clique of political bandits.

The humongous sleaze being carried out by operators of this government has undoubtedly made operators of previous government holy saints and the annoying aspect is that this current bunch and their dumb supporters will never see anything wrong in what’s going on. They always have more than enough justification to explain away the massive thievery that’s being perpetrated by officials of this government especially in the nation’s oil and gas sector particularly the fuel distribution subsector of our downstream.

The same daily average of petrol imported and consumed in Nigeria in May 2021 was pegged at 103million litres (Source: NNPC).

How do you explain this? Watch the numbers closely in less than 90 days, ghost imports and consumption averaging 53million litres everyday happened under our nose.

Lazily and complicitly, those who are supervising this monumental heist quickly blamed it on smugglers. While the lazy and predominantly incompetent folks in the media space echoed the same lies.

Is it not mind-blowing and outright mischief for the NNPC and the Ministry of Petroleum Resources to blame the leaks into the neighbouring countries for the tripled imports of Premium Motor Spirit from the corporation’s offshore bridging and crude for product swap arrangement?

The truth from available data is that between Chad, Niger, Cameroon, Togo and Benin Republic, our close neighbours, the cumulative daily petrol consumption in these countries are not more than 8.6million litres.

Togo and Chad our other neighbouring West African countries have daily estimates of 1.03 million and 300, 000 litres respectively. As explained by informed analysis of a vexed and concerned Nigerian on social media, “to smuggle 53million litres of PMS across Nigerian borders into our neighbouring West African countries everyday for the 31 days in May will require 1,177 long haulage trucks (tankers) on daily basis. This translates to 36, 511 trucks (tankers) in 31 days.”

So, these guys at the Presidency, Petroleum Ministry and NNPC, want us to believe that 36, 511 long haulage trucks (tankers), covering a distance of 456 kilometers if lined up closely together, passed through our borders without any trace, interception or a single capture?

In March, the Presidency approved $1.5 billion of spending for the NNPC on the rehabilitation of the Port Harcourt oil refinery and awarded a contract to Italy’s Maire Tecnimont.

The Presidency has also just approved contract awards for the upgrade of the NNPC Warri and Kaduna refineries to Saipem SpA and Saipem Contracting Ltd for $1.484 billion.

Curiously, all the three companies none has a refinery technology of its own. They are all technology vendors and from one country, Italy. Do you see something wrong in this? If the NNPC was actually serious about bringing the three plants back to full or even optimal life, couldn’t it have made more technical sense to bring in the owners of the technologies at the three refineries or at worse let them be part of a consortium to resuscitate the plants?

This government since 2015 it came into power could not fix any of the nation’s existing three and half refineries even though this was one of their key campaign promises that brought them into power. It’s now they are leaving office that suddenly they woke up from their slumber to start doling out billions of Dollars contract under the pretence of working to bring back the refineries to life.
NNPC and the Presidency wasted and looted over N3 trillion by way of reported losses on these refineries from 2015 to 2021.

They squandered another $603 million from 2016 to 2020 in failed Turn Around Maintenance Programs, yet they could not fix these refineries. Why are they still looting and stealing so brazenly using these same dead refineries as cover when in real sense they don’t actually want the plants to function at all so they can continue in the fuel import and crude-for-product swap racket.

As far as the Nigerian experience is concerned in the refining subsector, doling out billions of dollars for alleged rehab/turnaround maintenance is the easiest part. From now on, excuses after excuses will be manufactured on how paucity of funds has made it difficult to thoroughly execute the projects. And Nigerians will watch helplessly as hopes will again be dashed as usual while the money will also go with the wind and with the government.

How do you reconcile that at the same time of doling out billions of dollars to wake up three comatose refineries, this same NNPC is paying $2.7 billion for 20 percent stake in the 650,000 barrels per day Dangote refinery that has not even started operation and is even running into financial crisis as a result of its debt repayment schedule to its creditors?

Does anybody still doubt that Nigeria under this bandit administration has become a huge crime scene with the ongoing heist and political roguery being unleashed with impunity and bandit arrogance?

While it is good to give someone a chance, in Nigeria the elite have taken us all for a ride and have consistently failed to deliver on any promises made.

It’s unimaginable that a President who came to fight the fraud in the nation’s oil business is under his nose recording far worse heist in the same sector. Subsidy bills have been piling up in multiple magnitudes from what obtained in the preceding administration. He has served for six years and could not build even one new refinery or even thoroughly refurbish existing ones. From engineering conception to full actualisation takes about 48 months for a full refining plant in any terrain of the world to be built. Some may even come on in less time.

No matter what anybody wants to say, it’s just a matter of the priorities of General Buhari and his government that is giving us this shameful outing in our downstream subsector.

The most painful thing about the brazenness, impunity, open heist, wickedness and economic sabotage by operators of this government is that a majority of Nigerians are not reading the signs well and decoding what is truly happening. This country is being massively raped and looted. God help Nigeria!

IFEANYI IZEZE is a Columnist with National Daily Newspaper and can be reached on: iizeze@yahoo.com; 234-8033043009