TRIBUTE: Sir (Prof.) Victor Uwaifo + Giodo-Giodo Album: The Life, Time And Passage Of A Virtuoso Of The Arts

Due to their (songs) popularity, a Ghanaian fabric was nicknamed Joromi, while Guitar Boy was used as a code name for a military coup in Ghana in the 1970s. 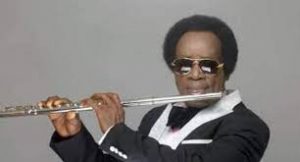 Prof. (Sir) Victor Efosa Uwaifo (M.O.N) was born on the 1st of March 1941 in Benin City, Nigeria. He attended Western Boys High School in Benin City and St. Gregory’s College, Lagos between 1957 and 1961. He started playing the guitar at the age of 12 and his earliest popular music influences came from listening to gramophone records of Spanish and Latin American music.

While in school, Victor Uwaifo led a number of school bands, he played for Victor Olaiya’s all-stars band in Lagos on contract. He won a scholarship as the best student at the Yaba College of Technology, Lagos where he studied Graphics between; 1961 – 1963. On graduation, Victor Uwaifo worked with what is now the Nigerian Television Authority before forming his own band, the Melody Maestros in 1965. It was the band that stormed Japan Expo 70 and FESTAC 77. 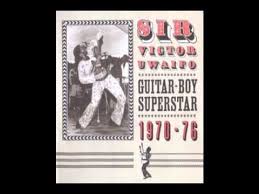 He recorded many songs as a solo artist between 1960 and 1965. These include “Oko no mu me”, “Police and Akugbe” and many others. His major break however came when he signed onto Philips (West Africa) label in 1965. Victor Uwaifo and his Melody Maestros had great hits like Siwo-Siwo, Guitar Boy and Joromi which were very popular in Nigeria and the West African sub-region in the late ‘60s and early ‘70s. Due to their popularity, a Ghanaian fabric was nicknamed Joromi, while Guitar Boy was used as a code name for a military coup in Ghana in the 1970s.

Joromi; a song based on the story of a legendary hero in Benin history, won a gold disc award, the first in Africa in 1966. Of equal significance also is the song Guitar Boy which narrates his encounter with a mermaid one night at the Lagos bar beach in 1967. He immortalized the experience not only in song but also with a sculptural representation of the mermaid and his guitar, constructed in a water pool at his Revelation Tourist Palazzo in Benin City. 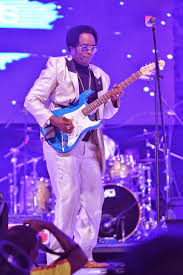 *The Sasakossa King on stage

Victor Uwaifo also invented the double-neck “magic guitar” with 18 strings which he can rotate 360 degrees at the speed of sound. In 1971, Uwaifo opened Joromi Hotel in Benin City and also established a television and recording studio where he produced the famous Victor Uwaifo shows in the late ‘70s and ‘80s.

Victor Uwaifo and the Melody Maestros had several national and international performance tours. He represented Nigeria at the Black Art Festival in Algiers in 1969 and at the African Common Wealth Festival, London in 1973. Victor Uwaifo also toured Ghana, Abidjan, the United States of America, Japan, Europe and the former United Soviet Socialist Republic.

In 2007, the Nigerian Television Authority celebrated his 50 years on stage. Victor Uwaifo was very active in the performing circuit. He experimented successfully with a fusion of hip hop and highlife music in an album titled Colabo (2012) featuring younger Nigerian musicians like Tuface Idibia, Dare Art Alade, Henry Sax, Tobi Adegoke, Kunle Ayo and Ekhator Osas. Other of his latest albums include mixed grill (Ala Carte), Titibiti Expo, Yo-Yo-Yo, Old Wine in New Bottle, Musical Memories ‘60s and ‘70s and Lost and Found. Victor Uwaifo remains a versatile artist and a living legend getting better with time and age. 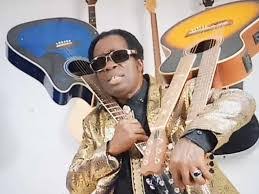 He was a trustee of the Performing Musicians Associations of Nigeria (PMAN) and President of the Superstars and Elders Forum of Edo State and Justice of the Peace (JP). He inspired a whole generation of Nigerian musicians. The legendary Sonny Okosuns had his apprenticeship under him.

To give life and works an enduring legacy, Victor Uwaifo has a rich presence on the internet as well as a museum of “sight and sound” at his Revelation Tourist Palazzo, Benin City. His extraordinary talents as a sportsman, fine artist, sculptor, technologist, innovator, multi-instrumentalist, musician and more recently an academician set him apart as a rare breed, whose ingenuity has sustained his musical practice since the 1960s.

Prof. (Sir) Victor Uwaifo holds a Bachelor’s degree in Fine and Applied Arts (First Class Honors and Valectdictorian, 1995) and a Master of Fine and the Applied Arts University of Benin in 1997; an honorary Doctor of Letters degree from the same University in 2009. He was appointed a visiting professor to the American Heritage University, California, the USA in 2009. He was also a fellow of the Nigerian Academy of Letters.

Until his death in his eightieth years of age, Sir Victor Uwaifo continued to contribute to professionalism and scholarship as a lecturer at the University of Benin. He also ran the Victor Uwaifo music Academy. For his contributions to the development of the creative arts in Nigeria, Victor Uwaifo was awarded the Nigerian National honour of Member of the Order of the Niger (M.O.N) by President Shehu Shagari in 1983. He had over 500 songs and 100 records to his credit, with 6 Gold and 4 Silver awards. 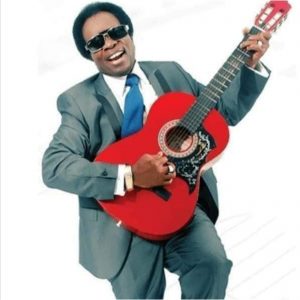 As Nigerians and personalities worldwide seek to know the cause of the death of the musical maestro, a family source, Goodman Osarentin said that the legend whose “Mammy Water” album was a hit for decades, succumbed on Saturday at the age of 80.

“I want to use this opportunity to clear this misinformation. We have heard rumours going around that our father, Sir Victor Uwaifo died of COVID-19. It is not true.

“He died of pneumonia and not COVID-19. He was rushed to the hospital on Friday and passed on the following day on Saturday, August 28. “We did the necessary tests. He was treated for pneumonia.”

Meanwhile, as the world stands still for a colossus whose life and time edifies the quintessence of magnitude for the edification of excellence, we at Pegasus Reporters join in wishing Sir Victor Uwaifo a pleasant reception before his Lord even as we send our heartiest condolences to the family, friend and Nigerians in general for his loss.