It stated that over 2.6 million samples of the virus, out of the nation’s roughly 200 million population, were tested, with an average test positivity rate of six percent. 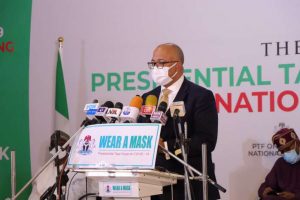 The NCDC made this known via its website on Monday morning, adding that the country reported 388 additional COVID-19 infections on Aug. 22.

It said the recent surge in infections was driven by the spread of the Delta variant in the country.

Newsmen report that the new infections indicated a decrease from the 1,064 cases announced on Sunday.

The Public Health agency noted that eight COVID-19 related deaths were recorded, which increased the country’s fatality figure to 2,268.

It added that the new cases were reported in 11 states and the FCT.

The NCDC stated that Lagos State reported the highest infections of the day with 166 new cases, followed by Akwa Ibom (89), Rivers (76) and Oyo (15).

The NCDC added that the country had successfully treated 168,455 COVID-19 cases following the discharge of 135 additional patients on Sunday.

The agency noted that the number of active coronavirus infections in the country had risen to 16,300, from 16, 055 reported on Saturday.

It stated that over 2.6 million samples of the virus, out of the nation’s roughly 200 million population, were tested, with an average test positivity rate of six per cent.