“Some JAMB officials and centre technicians came this morning to check the system and I can assure you that we have never encountered any network challenge or system breakdown. There are functional power supply and adequate security in the centre as well as cameras to catch any candidate who try to cheat” 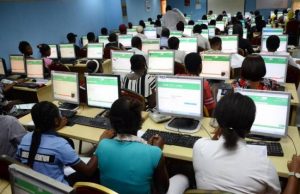 Some candidates and centre officials for the 2021 Unified Tertiary Matriculation Examination (UTME) have lauded the Joint Admissions and Matriculations Board (JAMB) for the hitch-free conduct of the examination.

Newsmen reports that examination which was Computer Based Test (CBT) is going on simultaneously across the states and the Federal Capital Territory in the country with exception of some states with security challenges.

Speaking to NAN on Saturday in Enugu, the Centre Administrator at Judith Foundation Centre at Amechi, Awkunanaw, Mr JohnFred Nnaji said he rated JAMB 99 per cent for their efficiency in this year’s CBT.

According to him, there were no computer breakdown, power and network failure at the centre.

“We have 500 candidates in this centre and 250 candidates are currently taking their exam while the remaining 250 will take theirs by 9am.

“We maintain the necessary measures stipulated by the examiner.

“They have been addressed and told what is expected of them. We have equally checked their temperatures and ensured they washed their hands, wear facemask before entering inside the hall,” he said.

Nnaji said the centre had 275 computers, 250 for candidates and 25 for backup in case anyone failed.

“Some JAMB officials and centre technicians came this morning to check the system and I can assure you that we have never encountered any network challenge or system breakdown.

“There are functional power supply and adequate security in the centre as well as cameras to catch any candidate who try to cheat,” he added.

A candidate, Miss Kosisochukwu Igwedibia said she did not experience any issue throughout the exam.

“This has shown that JAMB has changed for good unlike last year many people complained of network failure and other issues,” she said.

Esther Ipuole said JAMB has improved from what she used to hear about them.

“The systems were working faster and I finished before time.
“I expect 100 per cent performance because I take my time to go through the questions many times,” she said.

She appealed to the exam umpire to always ensure that students wrote the exam once without resiting.

Celestine Isaiah lamented that questions on Literature-in-English were tough making it difficult for him to finish before time.

“Everything were moving on well until I get to Literature and it became a big challenge to me because we didn’t read some of the novels and poems,” Isaiah said.

Meanwhile, an official of JAMB who pleaded anonymity said the board made their system and operation easier for candidates to write CBT without hindrance.

“This is why we allow them take the mock exam before this one to prepare them and even this morning we have taught them how to use mouse,” he said.

Some candidates, at the University of Nigeria, Enugu Campus (UNEC) TETFUND CBT Centre expressed their satisfactions with the process.

They said it was hitch-free when compared to the 2020 UTME in some centres in the state.

Miss Charity Ezeji, a candidate said the whole process was perfect as there was no interruption with the network.

Mr Chijioke Onyema, another candidate applauded the JAMB for their effort in making the exercise a success.

Miss Joy Nwagbo, at the UNEC CBT Centre said she was pleased with the exam as the process was conducted under a smooth atmosphere.

“Operators at the centre were cooperative and attended to as many candidates that needed their attention,” she said.

Earlier, one of supervisors at the centre, Mrs Ifeakanwa Agbala urged the candidates to be law-abiding once they go into the examination hall, adding that they should not go in with any incriminating materials.

“Every candidate should make sure they only go into the exam hall with their examination slip and pencils and as well concentrate on their work,” she urged.

Agbala, who is a Lawyer from UNEC and assisting in supervising the UTME examination called on all the candidates to be sure of their centres, as well as their examination dates so as not to cause confusion in examination centres.,

“Candidates should please check their timetable properly to avoid confusion in the exam hall, for those of you who came thinking that today is your date, please go and be sure when you are to sit for your exam,” she pleaded.

She told NAN that there was a standby generator incase of power failure during the examination, adding that security was optimal.

Mr Nonso Nwune, the JAMB Technical Staff said that those who came late would not be allowed to sit for the examination as the number of candidates whose names were captured before entry the exam hall were the ones allowed to take the exam.

Nwune revealed that the network was perfect as there were no challenges with the computers at the centre.

Mr Chima Ilo, the Technical Engineer of the University CBT centre told NAN that only two sessions would be involved on the first day.

Ilo said that a total of 500 candidates were expected to sit for the UTME examination at the UNEC Centre on the first day, adding that 250 candidates per batch were to be present.

“The first batch was supposed to be 250 candidates but we had 240 that are sitting presently, which means that 10 candidates are not at the exam centre,” he said.

Security personnel were at the centre checking in the candidates into the examination centre to avoid coming in with incriminating material.

Nigeria Security and Civil Defence Corps personnel, who spoke on condition of anonymity said that the process was going on smoothly as the candidates were complying with the security orders.

It was a similar story in some centers at the Institute of Management and Technology (IMT), Abakpa Nike and Ngwo in Udi Local Government Area as candidates expressed satisfaction with the examination conduct.

Meanwhile, some parents and candidates bemoaned the poor time management by most centers.

NAN gathered that the first round of the examination scheduled for 7am started between 8am and 8.30am while the second batch began between 11am and 12 noon.

The parents, who hailed the conduct of the UTME, called for proper time management by JAMB.