I am now a convert to the view that something has to be done with social media. It cannot continue this way. There must be a regulation of a sort if not we may wake up one day and a fake story will set the nation on fire. 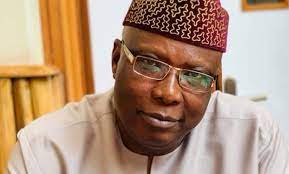 Senator Babafemi Ojudu is not new to any media practitioner or follower of happening in the media space. Having served as a Senator of the Federal Republic of Nigeria, the distinguished legislator and presidential adviser bared his mind on a government plan to regulate social media. He gave his reason on his LinkedIn handle. Hear him!

I am a journalist of about three decades of experience who joined many other colleagues and compatriots to fight for press freedom and free speech. I am however distraught by the way this is abused now in Nigeria.

(It seems) anyone can pick his phone now and post untrue and silly information about anyone without any penalty. They are doing it against the nation as well as pitching one ethnic group against the other. They are destroying family bonds and hacking at the bond that ties the nation together. People, both ignorant and informed and lapping up this rubbish and digesting making up their mind about people and institutions based on falsity.

I woke up early this morning to receive the post below from several of our people abroad to justify insecurity in Nigeria and the breakdown of law and order. “Oh if this could happen to a popular Yoruba akewi Nigeria has become a failed state”, one of them posted.

I was concerned and began to search for further information on this. I was told Mr Femi Salako who posted the story initially is a popular Akure based blogger with a substantial following. Efforts to reach him to find out the veracity of the story was unsuccessful. I eventually got across to Mr Kunle Ologundudu, the subject of this fake story. He spoke to me ‘from the dead’ and said he is hale and hearty and had no incident with gunmen. He said he has been inundated with calls from home and abroad since 2.00 am.

Now you can see how the so-called citizen journalists have been setting the country on fire and giving it a very bad and horrendous image. Lies is their trade and scaremongering and hysteria is their trademark. While practising journalism actively we use to refer to such people and their fake trade as ‘agbeleko’, that is ‘sit at home and fabricate’. They neither seek nor verify information. They are evil-minded people out to deceive and cause chaos in society.

I am now a convert to the view that something has to be done with social media. It cannot continue this way. There must be a regulation of a sort if not we may wake up one day and a fake story will set the nation on fire. 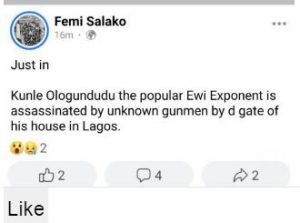 Senator Ojudu post is still getting responses from notable Nigerians. Among those who have is one Adebayo Ola, PhD, who wrote:

“Too much lies in circulation causing so much havoc in the society. I think there should be consequences for publishing falsehood”

“This is what I was telling some people quite not long, not until people are subjected to penalty and discipline in spreading or publishing fake news, they won’t desist”

Yet, one Aloaye Wilson Alli, PhD, chipped in:

“I have often said that space must be regulated; it can’t just be free for all. Even the freedom of speech has to have a limit. We can not just wait and allow scaremongers and the likes to set this country ablaze. I am so deeply concerned and afraid of the trend, and to make matters worse, I don’t have another passport or dual citizenship in another country”

What’s your view on the government plan to regulate social media?