Battle Of The Bandits – Dele Obamodi

It is now obvious that Sheikh Gumi relishes in publicity and sophistry. The more controversial it is, the better for him. The Sheikh cannot claim not to know the backlash his latest advice to the government will generate. With the benefit of hindsight, I don’t think he cares. Sheikh Gumi has done and said many things in the past that are as controversial, if not more, as the present one.

Sheikh Gumi has never hidden his sympathy for the bandits going by some of his utterances. He once advocated for dialogue and blanket amnesty for the bandits. He also made allusions that the bandits learnt kidnapping from the Niger Delta Militants group (MEND). Some of his controversial sayings are worth mentioning here: “If the country could pardon coup plotters who committed treasonable offences in the era of military administration, the bandits can as well enjoy similar forgiveness even better under democratic rule”. Again, he said “kidnapping children from school is a lesser evil because in the end, you can negotiate and now bandits are very careful about human lives. Before, the mission of bandits was to go into a town, ransack it and kill people”

The Sheikh is so adept at his support for the bandits that many of us are even helping him without knowing it. He gets primetime coverage on all fronts, both in the mainstream and social media. The visibility he gets is tremendous, however controversial.

Sheikh Gumi’s latest suggestion or advice is that the government of Nigeria should sponsor or support good factional bandits to fight the bad bandits in order to annihilate them all and free the country from their clutches. The bad bandits are the ones responsible for all the kidnappings and killings in most parts of the country, especially Northern Nigeria. According to the gospel of Sheikh Gumi, not all bandits are bad, just that some are more ‘badder’ than others. There are good and bad bandits in the banditry industry. Sheikh Gumi’s good bandits’ parameters might look something like this:

Sheikh Gumi should know since he has been interacting and lending his support to all shades of bandits. Absurd as it sound, is it the same Nigerian government that has consistently find it difficult to equip the military in fighting insurgency, banditry and the killer herdsmen that will now empower good bandits with weapons to fight bad bandits in order to wipe them out? This is just another distraction by Sheikh Gumi. The Yoruba would say: A kii fi ete sile pa lapalapa, meaning “one does not ignore leprosy to treat a rash” 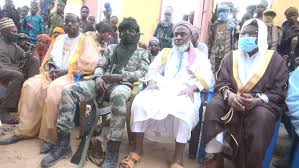 *Sheikh Gumi during a visit to the bandits’ enclave

Let us even for the sake of argument, agree to Gumi’s suggestion. After that, what next? At what cost? What is in it for the so-called good bandits after, assuming they succeeded in wiping out the bad bandits? What becomes of the now supposedly heavily armed and emboldened good bandits? Will they agree to be demobilized and lay down their arms? Who will rein in the good bandits and put them on the leash to control them? Who or what fills the vacuum that must have been created with the destruction of the bad bandits? What happens to the lucrative multi-million naira kidnapping business now open for grabs? Is there really anything called good bandits? Google describe a bandit as “a robber or outlaw belonging to a gang and typically operating in an isolated or lawless area”. There is nothing to suggest that bandits can be good.

If this advice by Sheikh Gumi is not incongruous, it is certainly ludicrous. If it is done, the whole of Northern Nigeria will become like another Libya. A complete breakdown of law and order. Northern Nigeria will become a killing field with bandits and warlords roaming the country and engaging themselves in a war of supremacy. Kidnappings and killings will increase exponentially. The so-called good bandits will metamorphose into another behemoth of unimaginable proportion. The ripple effect will be felt everywhere and for Nigeria, it will just be a matter of time.