Business & Economy: The Wahala In Dangote Duvet – By Daniel Bott

With all the favours: tax exemptions, special status, Forex allocations, special limestone mining licenses etc, Aliko’s money is still melting like cotton candy on a hot summer afternoon. He has activated his Plan B. Can you blame him? 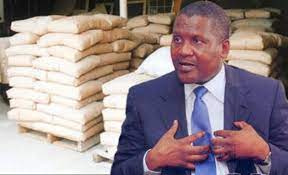 Earlier this week, news broke that Aliko Dangote was moving 60% of his family investment to the US. Two days after, we saw him in Tanzania promising to increase his investment in the country because he wants to support the new president, whose business decisions have been investment-friendly. I am happy for him. He has sense.

But as a businessman, I am not sure Dangote is a model. Don’t take my word for it. Let the data speak:

In October 2016, Dansa, Dangote’s fruit juice company packed up because it wasn’t making a profit. It closed shop, owing to its workers 6 months salary.

He also started a $13 million tomato processing plant in March 2016 and closed shop in August 2017, saying it was because of “importation of tomato paste, shortfall in the supply of fresh tomatoes and power failure.” It is funny that they didn’t consider these three factors before commencing.

So they started a tomato farm that will supply fresh tomatoes, then do some kind of backward integration. After spending $3million to set up a greenhouse, the farm died. It has been starting and stopping since then. No money, no tomatoes, no factory.

In November 2017, it was the turn of Dangote noodles to go under. In his words, they wanted to “focus on pasta and flour.” He sold the noodles factory to his biggest rival, Dufil, makers of Indomie. It was like Coca-Cola buying a Pepsi plant. A business abomination.

Have you ever wondered what happened to Mowa Water, Dangote’s bottled water? Well, it went down with Dansa, or soon after.

Then his Dangote Flour was acquired by Olam in 2019. He left the noodles business to concentrate on flour. But even the “commitment to flour” wasn’t enough to stop Dangote Flour from baking and burning.

At the start of the Ramadan fast, Dangote Sugar wrote a petition against BUA Sugar, asking the FG to place trade sanctions on BUA for “undermining the National Sugar Master Plan.” In English, he wanted the FG to tilt the competition in his favour again by grounding BUA. BUA claimed that he was being blackmailed because he refused to hike sugar prices at Ramadan as Dangote did.

I read a Reuters report some years ago (and it’s still online) which revealed that at the height of the naira-dollar crisis of 2016, Dangote bought at least $161million in hard currency from the CBN directly within March to May 2016. This was 90% of all the USD that the CBN sold within that period. All other manufacturers – all 2,000 of them – got the balance of 10%. He bought the USD at the official rate of N197/199 while other businesses bought in the black market at N320. Reuters reported that Dangote made over $100 million from this Forex deal.

Dangote has always been the favourite side chic of every government since the return to democracy. In 2003, he was alleged to have part-funded Obasanjo’s re-election campaign when Atiku was doing anyhow. Then he befriended Yar’adua, then Goodluck, then, even Buhari. On the day Goodluck, his former zaddy was licking his wounds from the electoral defeat of 2015, Dangote was alleged to be clinking glasses and performing a lap dance for Buhari, his new zaddy.

But why would such a “successful businessman” be thinking of moving 60% of his family investment to the US, and even adding to his capital investment in Tanzania which is already about $770million? The answer is in Buhari.

In 2015 when this administration took over, Dangote’s net worth was $17.7 billion. Right now, it is $11.1 billion. Meaning that in 6 years of Buhari, he has lost about 40% of his net worth. Project two years forward: what would his net worth be in 2023? My projection is that he might be worth around $8 billion, or less, depending on what happens to his refinery, and what happens in the security milieu.

With all the favours: tax exemptions, special status, Forex allocations, special limestone mining licenses etc, Aliko’s money is still melting like cotton candy on a hot summer afternoon. He has activated his Plan B. Can you blame him?

Sometime last year a short video was leaked by his side chic and we had the rare privileged of seeing a billionaire butt. Now we know that even Dangote himself is a side chic, an unfaithful one at that, moving from patron to patron: Obasanjo, then Yar’adua, then GEJ, now Buhari. On another level, his zaddy was Nigeria. Now he has two new zaddies: the US, where his funds will be protected from melting, and Tanzania where Madam President will help him recover the 40% that he lost in the hands of the Nigerian economy.

PRECEEDING ARTICLE: COAS Appointment As Missed Opportunity For Unity – By Farooq A. Kperogi