Communique Issued By The NBA At The End Of Her Public Interest Annual Conference Held At Jogor Centre, Ibadan 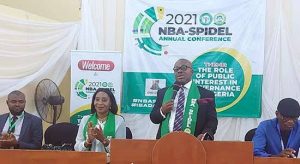 COMMUNIQUE ISSUED BY THE NIGERIAN BAR ASSOCIATION (NBA) SECTION ON PUBLIC INTEREST AND DEVELOPMENT LAW (SPIDEL) AT THE END OF HER PUBLIC INTEREST ANNUAL CONFERENCE WHICH HELD AT JOGOR CENTRE, IBADAN, OYO STATE ON THE 23RD – 26TH MAY, 2021 ON THE THEME: THE ROLE OF PUBLIC INTEREST IN GOVERNANCE IN NIGERIA

At the Conference, there were lead presentations from eminent speakers, senior members of the Bar, the academic, the political class, critical stakeholders and other renowned jurists.

Speakers at the Conference discussed issues surrounding the imperatives of Public Interest in Governance, internal security as a prerequisite for national development; the Legality and efficacy of Public Inquiry by State Governments; the Role of the Office of the Public Defender; Sustainable Development Goals, Third-Party Data Capturing for National Identification Numbers Project, paternity fraud in Nigeria etc.

Following the presentations, the Conference observed the following:
a. The disconnect between a large segment of the legal profession and the ideals of public interest lawyering, owing to the obvious gaps in the legal education curriculum;
b. The current federating structure of the Nigerian State is clearly unwieldy and the debilitating situation is clearly seen in the spate of security crises in the country.
c. The lack of local laws and an administrative structure for the administration of stolen funds in a manner that ensures that the funds are not re-looted but redistributed in an equitable manner.
d. That it is Constitutional and thus lawful for States Houses of Assemblies to make anti- Corruption laws and to establish State anti-corruption Commissions to fight the menace at the state level.
e. That cases of disobedience to court orders are on the increase. This sad state of affairs must be stemmed as accountability in governance cannot be promoted if court judgments are not obeyed and the rule of law is consistently negated.
f. The conference decries the growing spate of corruption in the nation and the attendant consequences on the common man.

In the light of the observations above, the following resolutions were made:

1. SPIDEL enjoins the government to make people-oriented policies which are ultimately for the welfare and security of the people.

2. SPIDEL expresses deep concern at the spate of insecurity in the nation and calls on the Federal Government to take urgent steps to ensure that the lives of citizens are protected.

4. SPIDEL views with deep concern, the frequent bloodletting in the incessant clash of farmers and herdsmen and recognizes the need for an urgent intervention to stop this ugly situation. To this end, SPIDEL approves the ban on open grazing by some States of the Federation and calls on other States to adopt the ban by the institution of appropriate laws to prevent further clashes and ensure the preservation of lives.

SPIDEL, therefore, submits that there is the need for the Federal Government to invest in and institutionalize ranching in the country.

The Conference urges the Federal Government to champion the creation of state police as a way of reducing over-reliance on national security outfits for preservation of lives and property.

6. SPIDEL calls for a constitutional review and restructuring of the country to ensure that each region is strengthened, security is ensured and all citizens have a sense of belonging. This will take away all feelings of marginalization that several regions are complaining about.

7. That the provisions of the Constitution in providing for the financial autonomy of the different arms of government be upheld. To this end, SPIDEL calls on State Governors to enforce judicial autonomy in their States and ensure the financial independence of the judiciary and the legislature. This will ensure that the judiciary is poised to deliver justice to the poor and oppressed without fear or favour.

8. The Conference commends the National Human Rights Commission and the various State Governments for the setting up of the various Panels of Inquiry to investigate the human rights abuses which led to the ENDSARS crisis. Every panel of inquiry set up by the Government of a State or the Federal Government is urged to administer justice to the people without being subject to the influence of any external forces.

9. SPIDEL calls on the government to recognise that violent Protests like the #End SARS Protest are not just about complaints against a particular police squad like SARS; but are ultimately about the absence of good governance. SPIDEL therefore calls on government to formulate and implement people oriented policies that are always in the public interest.

10. In relation to the provision of legal services for the indigent, SPIDEL commends the establishment of the Office of the Public Defender in Lagos State and calls on other States of the Federation to establish same, to ensure that legal aid is available and accessible to all especially the poor and vulnerable.

11. SPIDEL decries the increasing spate of corruption by the political class, pointing out that corruption robs the citizenry of the basic amenities to ensure a stable and comfortable life. SPIDEL therefore urges the National Assembly to create guidelines on the Declaration of Assets of public Officers and the adequate interpretation and administration of same by the Judiciary.

13. The Conference agrees that lawyers in representing their clients are social engineers who are merely carrying out their responsibilities as officers in the temple of justice to ensure that their clients’ right to representation is protected. Consequently, the allegation by the EFCC that lawyers aid corruption is misguided as it is in the public interest that anyone accused of financial crimes is entitled to legal representation by virtue of Section 36 of the Constitution.

a. Institutionalization of appropriate mechanism for efficient management of recovered assets.
b. The establishment of a database for all entries and vouchers.
c. Establishment of a Dedicated Fund for the depository of seized and confiscated assets.

15. SPIDEL expresses deep concern that several State Governments continue to disobey court orders and their Attorneys General appear unable to advise them accordingly. To this end, the Conference urges the NBA to amend its Rules of Professional Conduct to include provisions compelling all Attorneys-General to ensure that their governments obey court orders and any Attorney General that fails to do so be heavily sanctioned accordingly.

16. On SDGs, SPIDEL expressed particularly concern about issues of climate change and stresses that to achieve the Sustainable Development Goals (SDGs) on climate Change by 2030, Nigeria needs to take positive and active steps towards climate resiliency. Climate change directly affects the lives of the people and government must be careful to roll out policies that prevent environmental degradation as most Nigerians are farmers and protecting the environment is key to preserving their means of livelihood. To this end, SPIDEL calls for the incorporation of climate action education into the Nigerian curriculum and encourages Nigeria’s Economic Recovery Growth Plan (NERGP) to attach importance to climate resiliency.

17. SPIDEL calls on the government to empower women and strengthen existing systems through comparative use of gender budgeting tools. SPIDEL therefore calls for the domestication and implementation of all international treaties relating to gender issues faced by women and girls in Nigeria will go a long way in the society.

18. For the protection and development of the female gender, government is enjoined to:
– Re-orientate the populace to embrace women at decision making tables
– Empower women in order to know and speak of their rights
– Establish gender units in police, judiciary and other first responder agencies on the issue of women.

20. For protection of the fundamental rights of privacy, government must pass laws penalizing persons and agents who are in breach of the data protection law, particularly those who without authority use the data of citizens.

Furthermore, persons who act as third parties in data collection/analysis and usage should be men of high level of integrity who should also pass proper security checks.

21. While SPIDEL recognises the need for SIM registration, the Section maintains that Nigerians should be given more time for registration and there is no need for any ultimatum for such registration.

22. SPIDEL expresses deep concern at the numerous reports of incidents of paternity fraud in Nigeria and calls for caution in the handling of each such situation. SPIDEL decries the indiscriminate carrying out of DNA tests to determine paternity often without any order of court and maintains that there is a need to have laws regulating DNA testing in order to protect the rights of the Nigerian child.

23. SPIDEL resolves that rather than concentrating on the criminalization of Paternity fraud, the Nigerian society must deal with the causes of such acts from the root by eradicating certain barbaric laws against women.

24. SPIDEL lauds the launching of the ‘Sorosoke’ human rights reporting app of the NBA and points out that this will aid the general public in tracking and reporting human right abuses.