Should Nigerians, in all honesty, and responsibility, ignore their Minister of Justice and Attorney General Abubakar Malami after he openly demonstrated Arrogant, Wilful and Enlightened (AWE) Ignorance over the difference between cows and motor spare parts? 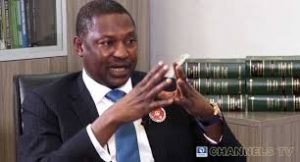 So AWE Ignorance, I have called you three times, therefore listen. You are dangerous. You can kill faster than a bullet. Your cancerous nature is responsible for many damaged polity across the world. That is because you incarnate as a human being and occupy sensitive positions of leadership in many countries. AWE Ignorance, I have seen you manifest as a president, presidential spoke persons, minister, governor, lawyer, medical doctor, pilot, pastor, imam, engineer etc. As a national newspaper columnist, I encounter you every week when your disciples read my essays upside down with a premeditated, ill-conceived mindset that betrays their irredeemable immersion in the depths of idiocy. AWE Ignorance, you are loud, loquacious, and many times arrogant. Unfortunately, those who wallow in your putrid cesspool are not aware of their predicament until they transmit your virus to humanity.

It violates the sensibilities of how people adorn the garment of AWE Ignorance and find it convenient to advertise the same at the marketplace. You find such people everywhere. They populate Whatsapp groups and many other places. The AWE ignorant people talk with boast, craven, and infantile convictions. They are pedestrian, insecure, and envious. To cover their insecurity and envy, they disgrace themselves with half knowledge and puerile submissions in a public space. I am sure we have all encountered AWE ignorant people one time or another. Who will save the AWE ignorant people? Does it follow that every AWE ignorant person is foolish? Could that account for the popularity of the maxim “the best answer to a fool is silence”? I have a problem with that submission because when we continually ignore AWE Ignorance, it has a way of becoming a popular sentiment and diffuses through the pores of society to be accepted as truth. It is pathetically unfortunate that most victims of AWE Ignorance are university educated with first, second, and third degrees. Does education have a place in the fight against ignorance?

Sometimes, circumstances lump the man of knowledge with the AWE ignorant people in one country, state, office, committee or even a Whatsapp group. How can the man of knowledge handle a situation where the AWE ignorant people keep advertising their wares before the whole world? Ignore them and let them frolic in the fetid gutter of tomfoolery or square up with them and let them drag you to their depraved levels? A senior colleague pointed out that when you engage a pig in a battle, inevitably, the pig will bring you to its stinking, debasing levels. AWE Ignorance is contagious. The AWE ignorant people can affect a whole country or the next person with their ignorance. Should Nigerians, in all honesty, and responsibility, ignore their Minister of Justice and Attorney General Abubakar Malami after he openly demonstrated Arrogant, Wilful and Enlightened (AWE) Ignorance over the difference between cows and motor spare parts? No, we will not ignore him and his AWE ignorance so that it does not fester and contaminate the whole country.

Following the recent meeting of the Southern governors in Nigeria, they collectively agreed to ban open grazing in the region. Many people across regional and ethnic lines in the country applauded the resolution. The Southern governors’ decision to ban open grazing in the region was informed by the terrorist behaviour of herdsmen who, in the line of their duty, plunder farmlands, rape women, steal goods and properties, and practically vanquish their host communities. Due to the activities of these murderous herdsmen, many lives are lost, and many farmlands left fallow. Certainly, there are other peaceful Fulani businessmen across the country engaging in their businesses quietly and orderly. Every Nigerian is free to live in any part of the country and conduct his business or profession peacefully. But Nigeria’s Attorney General and Minister of Justice who ordinarily, as a famed ‘learned’ fellow, should know more than everybody, advertised his AWE Ignorance on the issue by stoking the embers of ethnic strife. The minister, while responding to questions during an interview with Channels Television, submitted that banning open grazing in the South is like banning motor spare parts business in the North. Nothing could be more ridiculous. We all know that motor spare parts don’t destroy people’s means of livelihood and their sellers don’t rape, kill, steal, and conquer.

Never mind that that the present government has consistently deified mediocrity to an honorific level, Abubakar Malami needs education and promptly too. Perhaps his AWE Ignorance over the difference between murderous herdsmen and peaceful spare parts dealers is a function of the quota system in the admission processes in our schools and universities. This is why I insist that the quota system should be scrapped. How do you explain that a dull, ignorant student with a score of 02 is admitted to a Unity School while his counterpart from another part of the country with a score of 130 is denied admission? What terrestrial or celestial law justifies that injustice? Then, the ignorant student with the low score goes on to become a minister, governor, president or ambassador while his brilliant counterpart becomes a perpetual job seeker. The Quota system is evil. The ‘learned’ Justice Minister ought to know that the Southern governors didn’t ban open grazing because people from a particular part of the country are involved in the cow rearing business. Open grazing is banned because those involved in the business, irrespective of their ethnic origin, constitute a snare to their hosts. They are terrorists, bandits, armed robbers, and rapists. On the other hand, those who engage in auto spare parts business all over the country including the North are peaceful, tax-paying, and law-abiding citizens. They contribute to the economy of their respective host communities. In many cases, they build plazas, employ the local people, marry among them and are easily integrated into the community.

Abubakar Malami has advertised AWE Ignorance at the market place which has the potential to cause ethnic strife and bloodshed across the country. By his outburst, he has put a big question mark on his cognitive potential. In other climes defined by exemplary morality, Malami would be sacked or advised to resign with immediate effect. It is indefensible that a Minister of Justice will shamelessly dance naked before the whole world, in front of national television. These are the kinds of people who advise Mr. President and make policies in Nigeria. These are the kinds of people who have the trust of Mr. President. First, it was Isa Pantami, the minister for Digital Communication. Now it is Abubakar Malami, the Justice Minister. Gradually, the AWE Ignorance that pervades Nigeria’s corridor of power will be exposed. I am sure there are other trusted allies of Mr. President who are secretly invidious and desperately ignorant about the realities in the country. If Abubakar Malami can openly promote ethnic strife through AWE Ignorance, what he will do behind the scenes is better imagined.

Promise Adiele (PhD), the Convener of Third Force Movement is on Promee01@yahoo.com on Twitter @Drpee4