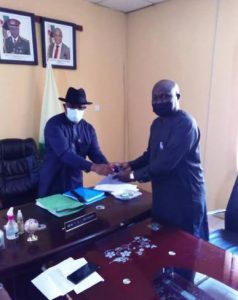 The new Chief helmsman was welcomed to the Area Office where he inspected the quarter guard mounted by a detachment of Delta State corps members. Thereafter, he was conducted round on a guided tour of office facilities by the outgoing Director.

After inspection activities, the two NYSC bosses retired to the venue of the handing over ceremony which was attended by all Staff of the Area Office and the State Coordinator, Delta, Mrs. Samuel Olutayo, who represented other State Coordinators in the South-South zone.

The handing over ceremony was also streamed live on Zoom device which enabled other State Coordinators, Staff and Stakeholders in the South-South States and friends of the Area Office; to participate in the ceremony, virtually. 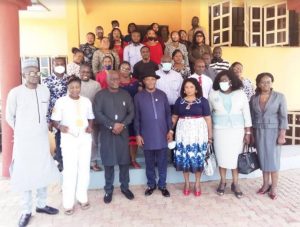 The outgoing Director, Omotade Ayodele Folorunso, used the opportunity of this occasion to reel out his achievements as the thirteenth State Coordinator of the NYSC Scheme in Delta State as well as the pioneer Director NYSC South-South, spanning a period of one year and seven months. He appreciated their Excellencies, the Governors of the six South-South States for their support and assistance given to the Scheme during his tenure of office.

Also, he thanked all Staff and corps members whom he said, contributed immensely to the success achieved in the course of his tour of duty in the Niger Delta. He enjoined staff both at the Area Office and at the State Secretariats under the zone to give greater cooperation and support to his successor.

After signing the handing over notes, the new Acting Director thanked and commended Omotade for his pioneering efforts in bringing the Area Office to it’s present enviable status. He described his predecessor as a thoroughbred administrator who has a unique style of achieving excellence in service and all assigned duties. “I am not surprised by the high standard that has been created within the short period of establishment of the South-South Area Office under Omotade. 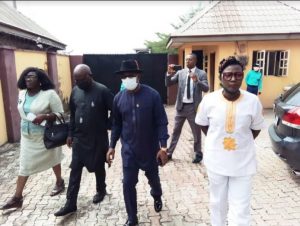 Thereafter, Sanusi promised to work hard to sustain the tempo of operations and improve on the legacies and milestones already laid by his predecessor.

The highpoint of the ceremony was the presentation of gifts to the outgoing Director by State Coordinators of the South-South States, individual Staff at the Area Office and State NYSC Secretariats.

Later, the new Director, Mr Sanusi, was introduced to select Stakeholders in Ministries, Departments and Agencies in Delta State in line with established tradition anytime there is a change of guards.

Meanwhile, Omotade had, at a similar ceremony held at the National Headquarters of the NYSC at Abuja, on Tuesday, 6th April 2021, signed the dotted lines on the notes as he took over from Mr Sanusi Abdulrasheed, as the new Director in charge of Corps Welfare and Health Services Department at the NYSC headquarters, Abuja.