Odumakin’s Demise: A Personal Loss To Me -Comrade AWA Bamiji 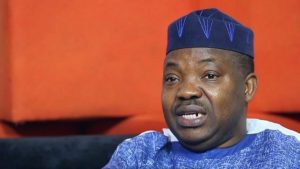 Comrade AWA Bamiji the Aare Apapo (President – General) of Agbarijo Egbe Odo Yoruba (Grand Council of Yoruba Youths) has described as shocking and a personal loss to him and the human right community in Nigeria.

In a media statement received by Pegasus Reporters Saturday, 4, April 2021, Comrade Bamiji sent his condolences to the family of the deceased, the human right community and pray that God will grant the departed comrade a befitting rest.

The full statement as signed by Comrade AWA Bamiji is as below:

Odumakin’s Demise: A Personal Loss To Me.

“The news of death of my dear brother, Comrade Yinka Odumakin, came to me as a rude shock.

“As a family’s friend, I did call his Wife and my dear Sister in the Nigerian democratic struggles, Dr Joe Okei-Odumakin, his Sister – In – Law, Vera Okei, and his Personal Driver to confirm the authenticity of this strange story because I still found it difficult to believe regardless of being inundated with calls, posts and SMSs from various people including the gentlemen of the press.

“My Political Odyssey brought us together in 1998/1999 under the Leadership of Asiwaju of Yorubas and Leader of Afenifere, Late Pa (Senator) Abraham Adesanya, under whom he was serving as a young active man in Afenifere, alongside my other Brother, Late Reverend Adetunji Adebiyi, the Special Assistant to Senator Abraham Adesanya.

“At this period, Mr (Now Senator) Dayo Adeyeye was the Spokesman of Afenifere. Comrade Yinka Odumakin later replaced him after he left Afenifere Camp to join the People’s Democratic Party, Ekiti State.

“Our relationship was very cordial and it was just like the one I had and still have with my dear friend, Mr Ogunsua Dixon, former Personal Assistant to Chief Bola Ige, SAN, Late Deputy Leader of Afenifere.

“The unexpected Emergence of Pa (Senator) Ayo Fasanmi’s close friend of decades, Chief Reuben Fasoranti as the Acting Leader of Afenifere at the period when Pa (Senator) Abraham Adesanya was on the sick Bed suddenly divided the Camp of Afenifere till Today.

“The Majority of Afenifere members, including my goodself as a Vibrant Youth Leader in the fold, believed it was a foul play and total slap on our face because One must become the Deputy Leader of Afenifere before climbing the Ladder of Afenifere Leadership.

“Therefore, we stormed the Jibowu Headquarter of Afenifere with full force comprising the remaining 5 Governors of the Alliance for Democracy (AD), Senator Bola Tinubu of Lagos State; Aremo Segun Osoba of Ogun State; Alhaji Lam Adeshina of Oyo State; Chief Bisi Akande of Osun State and Otunba Niyi Adebayo of Ekiti State, for the historic endorsement of my Leader, Pa (Senator) Ayo Fasanmi, as the Deputy Leader of Afenifere and it was widely reported by the mass Media.

“After the demise of Senator Abraham Adesanya on the 26 April, 2008, the minority’s Camp of Afenifere, which he and the late Governor Adebayo Adefarati of Ondo State belonged still went ahead to confirm Chief Reuben Fasoranti as the authentic Leader of Afenifere without recourse to the majority.

“To play maturity over the issue, the majority kept mute throughout until 29 January 2019, when we, the majority in full control of the Six Yoruba Governors felt we must speak out through the Pan – Yoruba Summit to endorse President Muhammadu Buhari, GCFR, 2nd term ambition, under the platform of Afenifere Egbe Ilosiwaju Yoruba, contrary to their Media endorsement of Alhaji Atiku Abubakar, in the name of Afenifere.

“They pitched their Tent with former President Goodluck Jonathan in 2015 Presidential election in the name of Afenifere and nobody took their decision serious in our side.

“In 2011, he was a Spokesman to General Muhammadu Buhari (Rtd) before, during and immediately after the Presidential Election, when the Congress for Progressive Change (CPC) produced Muhammadu Buhari/Tunde Bakare ticket.

“We lost our Leader in Afenifere Egbe Ilosiwaju Yoruba, Senator Ayo Fasanmi, July 27, 2020, and a gentleman of the Press who was so close to him, Mr Eniola of the Punch Newspaper, Abuja, approached him for more details, and genuinely, he referred him to me.

“While compiling the programme of events at Dr Kunle Olajide Office, Secretary, Yoruba Council of Elders, YCE, and the Chairman, Organising Committee, 2017 Pan – Yoruba Summit, a frantic and fruitless effort was made by a young man, called Oloyede Samuel, to nominate Barrister Dotun Hassan, his friend from Epe, Lagos State, to come and speak on behalf of the entire Youths in Yorubaland during this Pan – Yoruba Summit held at Lekan Salami Stadium, Adamasingba, Ibadan, under the Chairmanship of Chief Afe Babalola, SAN, but it got to a point that Comrade Yinka Odumakin had to open up to him, regardless of our ideological difference, that I had been with Afenifere structure as a Youth Leader since 1998/1999 and that it won’t speak well not to recognise that unique effort at a period when all Yoruba Self determination Groups were coming together to stage the forthcoming Pan – Yoruba Summit, under the aegise of Yoruba Summit Group.

“Dr Kunle Olajide equally said he didn’t know this Barrister Dotun Hassan then, whose name his friend, Oloyede Samuel, who enchoing to us.

“Most interesting aspect of this game of politics of relevance at all cost was that I met this Oloyede Samuel for the first time that day, who served as Personal Assistant to the Late Yinka Odumakin that day.

“This is to tell the whole World that no matter how long we continue to play the politics of relevance, it will get to a point that it will be difficult to cover the truth from the Public.

“He was so active from his University days as a Student Leader, Political Science Department, and was blessed with One of our renowned female Comrades as a Wife.

“May God Almighty give your family, we, friends and Associates, the fortitude to bear this irreparable loss.

“We all love you my dear brother, but God loves you most.