For The Record: The Truth About Ownership of SASA (Shasha) Market In Ibadan

SASA is the Acronym for Structural Adjustment Settlement Area and it comprises about 13 hamlets and settlements brought together by Government.

Amidst acrimonious shouts to go and re-establish the Baale as the custodian of the Area even as some northern interest are calling for the re-enthronement of the Seriki SASA whose palace was forcibly removed by some youth, an anonymous reader has added a historical tinge to the debacle as to how the settlement came to be and who are the bonafide indigenous settlers. 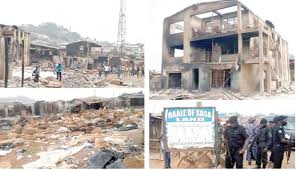 *SASA- a settlement brought to ruin

The government and the world believe that SASA is a settlement for the Northerners, No…lori iro

SASA is the Acronym for Structural Adjustment Settlement Area and it comprises about 13 hamlets and settlements brought together by Government.

It was one of the projects promoted by the late Chief Mrs Bolarinwa who sadly has her gateman as the Serikin SASA today.

You can’t solve the problem when you don’t even know that SASA is not a Fulani or Hausa settlement but a community established by 13 Yoruba communities to foster Trade and Commerce.

You can’t solve the problem when you fail to acknowledge the fact that 95% of properties burnt or razed down in SASA belong to Yorubas. Loaves of bread were soaked in petrol by the Nothern miscreants to burn the properties of Yorubas. 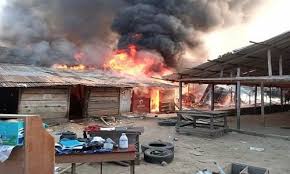 *SASA Market in Ibadan on fire

Today Nothern Governors are asking for compensation for people who sleep under trailers, or kiosks while the Government of Oyo is not talking about the people who lost their shops, offices, houses and valuable properties or how to rebuild the community without displacing the original owners by allowing the northern governors to rebuild SASA

So let the world take note. SASA (Sustainable Adjustments Settlement Area) was a Scheme designed by the Ford Foundation to resettle displaced 10 villages, occupying the current location of IITA in 1969. My Dept has an ongoing Research Project area that encompasses one of the abandoned villages (Omowole village) located at the West Bank, IITA.