“Interestingly, Godwin Obaseki was at the project site maligning a government and a project in which he played a major role as Chairman of the Edo State Economic Team. One is at great pains not to think that a higher spiritual force compelled him to commit the faux pas”

On Monday, February 22, 2021, Edo Governor, Mr. Godwin Obaseki decided to remind Nigerians that there is a government in the state’s saddle. He simply validated that since he was sworn in for a second term on November 12, 2020, the government has been in sleep mode. Further validation: He has yet to constitute a cabinet, and, therefore, it is safe to conclude that Edo is being governed by a triumvirate of Godwin Obaseki, Philip Shaibu and Osarodion Ogie. 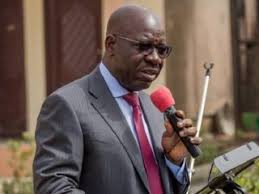 Whereas, it took the report of the Federal Government’s ambitious construction of N34 billion worth of 377 rural roads across 266 communities around agro-corridors countrywide, including some community roads in Edo South and Edo North senatorial zones, to jolt Godwin Obaseki from his slumber; his further or subsequent actions at trying to draw public attention to a modicum of governance in the state should have been more contemplative and ennobling. It was, therefore, a strategic misstep that Godwin Obaseki made with his February 22 outing.

Evidently, to counter the recent inspection of the Federal Government-funded rural roads in Ovia Northeast Local Government and Etsako East of Edo State by the Minister of State for Budget and National Planning, Prince Clem Ikanade Agba, Godwin Obaseki had hurriedly set out to inspect, among others, the Uwelu East and West catchment which he (Godwin Obaseki) ignorantly claimed as “Textile Mill Road catchment” of the Benin Stormwater project. For the purpose of clarity, the Oshiomhole government, from available records, had only paid about N22b of the contract sum for work executed rather than the N30b falsely claimed by Godwin Obaseki. He also inspected a secondary drain (side gutter) which is meant to take run-off water from the road and claimed it to be a primary drain (underground drain) which is supposed to channel water to the watershed. This, again, is another lie.

Significantly, Godwin Obaseki had, on the occasion of his knee-jerk inspection tour, made certain comments that underpinned the real motive of his tour. His verdict that the Benin Stormwater project was a fraud that was not meant to work simply portrayed him as impulsive. Besides, his allusion to the Minister of State for Budget and National Planning, whom he said “now supervises big projects in Abuja” after supervising the “fraudulent” Benin Stormwater project, was inescapably malicious.

One would have expected that Godwin Obaseki would be much more strategic and temperate in governance as well as in his official pronouncements and verbal exhortations. But it does appear that he is incapable of doing so. It is critical mischief in leadership, which cannot be cured by mere happenstance, especially when he does not possess the essential mitigating virtues. The fault, therefore, is in him, not in his stars. And, as they say, people cannot give what they do not have. 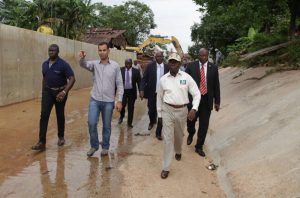 *Ex-governor Adams Oshiomhole inspecting the project during his tenure

Read him: “You can see for yourself that the so-called stormwater project was a fraud; it was a contract to defraud Edo people. From what I can see now, the stormwater project in this catchment area was never designed to take water away from the area. The area was never drained. You can see the level of what we are doing now as compared with that of the previous administration. It is almost a two-meter difference. There is no way you can drain water from a lowland into higher ground. We say we have experts and paid over N30 billion for this project. The person that supervised this project today calls himself a minister supervising bigger projects for the Federal Government. This is not acceptable.… They spent N30 billion claiming that they want(ed) to take away the suffering of Edo people, de-flood the area and restore value to the people’s property. Look at what has happened now to this project for five years.

“With what we have done now with less amount of money, we are going to finally drain this area and bring back life to the people in this catchment area. I don’t like probing but this time, we have to set up a panel to get the facts of what happened. We can’t throw away such a large amount of money. People must be made to account for their time in service in government. They have to explain to us how they spent the N30 billion on a project they claim(ed) will (would) drain water from a community. But the project drains the water to nowhere. They have the boldness to claim that we abandoned the project, which were never made or designed to work in the first place. Cleary, we will take the necessary precaution to recover all the money due to Edo people that was stolen from this project.”

Interestingly, Godwin Obaseki was at the project site maligning a government and a project in which he played a major role as Chairman of the Edo State Economic Team. One is at great pains not to think that a higher spiritual force compelled him to commit the faux pas. He spoke about setting up a panel to probe the Benin Stormwater project. That will be a great idea. But then, he should be ready to waive his immunity to appear before the Panel to explain his roles in the conceptualization and funding of the project, which he got his company, Afrinvest, to handle the N25 billion bond for the project from which he, through the company, allegedly benefitted in multi-million naira.

There are other salient facts to know about the design, execution, and supervision of the project:

1. The designer of the project is Aurecon of South Africa. The same company worked on:
(a) the Bar Beach and reclaimed the land where the Atlantic City is sitting in Lagos
(b) Queen Ede and Auchi gully erosion sites remediation
(c) the ten gully and watershed projects currently going on, inclusive of Gapiona catchment [Benin GRA], Igbe quarters water harvesting [Auchi]

All of these designs were supervised by the same Ministry of Environment, and Mr. Godwin Obaseki finds them good enough. Likewise, if the designs from Aurecon were not good, why would the World Bank approve them? 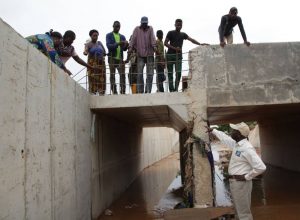 *Comrade Oshiomhole during an inspection tour

2. The contractor that started the project from inception is the same contractor being paid to work on the project with the same designs, terms and conditions, by the same Godwin Obaseki. What suddenly changed that he did not see in the more than twelve years that he has been in government?

3. Under the administration of Comrade Adams Oshiomhole, the contract was jointly supervised and certified by two ministries, to wit: Ministry of Works and the Ministry of Environment. The following served as Commissioners for Works during the period:
(a) Barrister Osarodion Ogie (current Secretary to the State Government)
(b) Frank Evbuomwan (current Managing Director of Edo Geographic Information Systems)
(c) Anslem Ojezua

4. John Inegbedion (Godwin Obaseki’s Commissioner for Infrastructure) was Finance Commissioner that made direct payments to the contractor for the project.

5. Mr. Godwin Obaseki has been in office for more than four years and has been working on the same project (as he claimed), with the above supposedly innocent people working on a project purportedly designed to defraud Edo people. Why did he perpetuate the so-called fraud for the last four years? Is it not ironical that Barrister Osarodion Ogie who supervised the project from the Ministry of Works, and who ordinarily should be investigated is instructively now spearheading the call for investigations and alleging a phantom intelligence report of plots to destroy the contract documents?

6. As Chairman of the Economic Team in the administration of Comrade Adams Oshiomhole, Godwin Obaseki visited the project sites several times. Why did he not complain about the so-called fraud in the project? Was the project not used as the APC government’s flagship achievement to campaign for him to be governor in 2016? Why did he not disclaim it as fraudulent? The truth is that the Minister’s inspection of Federal Government Projects in Edo state exposed Godwin Obaseki’s uneventful 100 days in office, prompting the supposed probe of a project he had previously applauded and claimed he had not abandoned.

7. And, besides, if the project is a fraud, as he claimed, why has he not terminated the contract?

8. Is the project a fraud simply because Obaseki has not been able to undertake the simple obligation of desilting drains in Benin to allow free flow during the rainy season, which is fast approaching?

The Storm Water Master Plan took about twelve months of study, according to official information, and it was designed by Aurecon of South Africa, one of the best companies in the world-renowned for handling such projects like the Bar Beach Area in Lagos, where the Eko Atlantic city is being built. The company was said to have deployed over 400 surveyors in Benin City, doing topographic-mapping just to understand the water flow system; where the watersheds were and the final destination for all floodwaters during the rains in Benin City.

According to available information, there were two identified watersheds: Ikpoba River and Ogba River, but the study showed very clearly that because of the topography, three-quarters of floodwaters usually end up in Ogba River; even from areas that are very close to Ikpoba River. The waters flow into Ogba because water does not flow up; it flows downwards and if you must make it flow up (in response to Godwin Obaseki’s claim about “Textile Mill catchment”), mechanical devices such as a pump have to be deployed in the area and there must be constant power. The Oshiomhole government simply identified the lowest point in Benin City where water could flow and where eventually it could end.

Regardless of the huge cost of the primary drains, the Oshiomhole government decided to proceed with the legacy project. Significantly, to preserve the legacy and sustain the flagship project, Oshiomhole had ensured the emergence of Godwin Obaseki who was part and parcel of the project for the purpose of continuity on the basis of which he campaigned and was elected. 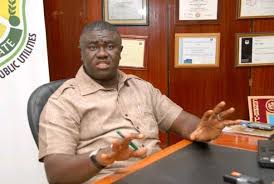 There is a voluminous report on the stormwater plan. Gleaning a one-pager, which shows the various watersheds, there are at least 23 catchment areas in Benin (Godwin Obaseki only visited one catchment). It simply means that whenever it rains, the flow of water goes in 23 different directions through the 23 different catchment areas, eventually flowing into the two major watersheds, which are the Ikpoba River and Ogba River.

Credible information indicates that the scope of work for the contract includes:

The government decided to take on this catchment because three-quarters of the Benin City flood waters go into the Ogba River and it is needed as a major tributary where the other drains would flow and empty into the river. The project itself, as of the time the Oshiomhole government left, was 70 percent completed. Godwin Obaseki should complete the remaining part of the project and maintain the current drains by desilting them for the interest of the Edo people.

Oshiomhole’s government had worked on about six of the catchment areas. There are, as learnt, 17 catchment areas that still need to be designed and constructed to complete the Masterplan in order to completely solve the flooding problem of Benin City. Irrespective of what Godwin Obaseki and his cohorts may think or do, the Benin City Stormwater Masterplan conceptualized by the Oshiomhole government remains to date the most ambitious attempt by any government in Edo State to solve the perennial flooding problem in Benin City.