A brother-in-law of the Governor of Ebonyi State Governor, Mr. David Umahi, and a younger brother of his wife, Mrs. Rachel Umahi has been arrested and paraded by the Federal Capital Territory (FCT) police command in Abuja for kidnapping. 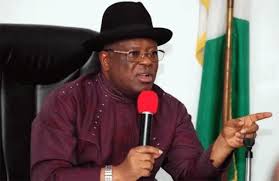 The arrest of the young man, identified as Chukwu Betherand, also popularly known as ‘fish’ is said to not have come as a rude shock to the Ebonyi first family if his claims of welfare negligence by the first family is to be believed.

The alleged kidnappers according to police sources were using the Ebonyi State Governor’s Lodge in the high brow Maitama area of Abuja as a hideout where their kidnapped victims were kept.

Some family members who confirmed the story to be true blamed Bethrand for turning into criminality through confirming his claims of tightfistedness of the Umahi family especially to close family members. “I blame Bertrand. He is an adult and must take responsibility of his actions. But I also blame his sister and her husband who only support people on Television. Every family member knows how **** they treat us….,” a family member who spoke on the condition of anonymity said.

The suspects who were arrested on February 6, 2021, by the police around the Apo axis in Abuja as they went for their bounty are named as follows :

Frank Uzor, 26, Nweke Uche, 19, Chester Uzor, 25, Chukwu Betherand, 27, Chukwu Samuel 25, and Kelechi Ngene were allegedly arrested at the point of collecting ransom from a relative of their victim. The FCT police operatives announced they have rescued 3 victims kidnapped by the alleged kidnap suspects.

A highly placed Ebonyi Government who refused to disclose his name said that “the Governor and his family are shattered by the mud thrown on them by Bertrand. Remember that they made him a councilor last year. You can imagine the pedigree of those to select to preside over us. An inter-state kidnapper. He must have been tired of kidnapping Eboyians before going inter-state…”, the government official claims.

Meanwhile, most Ebonyians have described the news of the arrest of Betherand as a big dent on the image of the first family and on the entire state.