“Aside from the Road Safety, all other paramilitary leadership are in the hands of the favoured group. Customs, Immigration, Prisons, Civil Defence and so on. This has never happened since 1999”

Yesterday, Lai Mohammed had the obscene and shameless effontrey to issue a veiled threat to Bishop Kukah for saying the truth we all know. Bishop Kukah in his usual annual Christmas message had pointed out the way Buhari has glorified nepotism since assuming power. Bishop Kukah went on to say that if any other Nigerian that wasn’t a northern Muslim does what Buhari is doing, there would have been a coup. 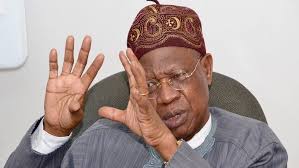 Rather than hide his face in shame and just allow the issue to pass, Lai Mohammed decided to take on Bishop Kukah who stands head, shoulders, and everything else above Lai and all the masters he has served and still serving.

One had expected Lai to tell us with evidence why nobody should accuse Buhari of nepotism. But he failed woefully in doing so. I will cite a few examples to support the assertion made by Bishop Kukah.

We all recalled when then acting president Osinbajo removed the DSS boss and asked him to handover to the next most senior officer. That person unfortunately was a certain Mathew Sayifa. Though professionally qualified, he was a Mathew Sayifa from Bayelsa state and so, cannot be “trusted” to occupy such a sensitive office. As soon as Buhari came back, he replaced him with the usual candidate. What was more painful was the fact that Bichi was called out of retirement to take over just because all those that were next in rank didn’t qualify in terms of their ethnic identities and religious beliefs. Lai Mohammed should puncture this argument.

The same issue played out when there was a vacancy in the NIA after Wale Oke left. A man who was said to have retired due to the fact that he failed exams 3 times was brought back to head those who were still in the service. The reason? Those left weren’t qualified in terms of ethnicity and religion. Lai Mohammed should puncture this.

Recently, there has been several rumours that plans are underway to short-change a certain police officer who will be the most senior when the current IG retires. Needless to ask why they want to short-change him. The reasons are obvious. Aside from the Road Safety, all other paramilitary leadership are in the hands of the favoured group. Customs, Immigration, Prisons, Civil Defence and so on. This has never happened since 1999. Even when the law is clear on succession, Buhari has breached it in favour of nepotism. This is a fact that nobody can controvert.

I can write a text book on the incidences of nepotism and favouritism under this government. In fact, OBJ and so many other prominent Nigerians have also raised the same alarm. If Lai Mohammed has the balls, let him come out publicly and defend the nepotism allegations against Buhari with hard and verifiable evidence. Issuing threats to a collosus like Bishop Kukah will never cut it.