Trump Warns Iran Over Attack on Embassy in Baghdad

“Some friendly health advice to Iran: If one American is killed, I will hold Iran responsible.

President Donald Trump has delivered a stern warning to Iran over alleged rocket attacks on the U.S. embassy in Baghdad. The warning came in a tweet which includes a photograph of three unexploded rocket shells that the president claimed came from Iran. 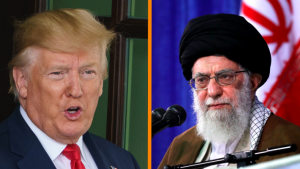 “Our embassy in Baghdad got hit Sunday by several rockets.

“Three rockets failed to launch. Guess where they were from? IRAN.

“Now we hear the chatter of additional attacks against Americans in Iraq.

“Some friendly health advice to Iran: If one American is killed, I will hold Iran responsible.

In a statement on Wednesday, the U.S. Central Command (CENTCOM) alleged that Sunday’s attack was “almost certainly conducted by an Iranian-backed rogue militia group’’.

The military reportedly said several buildings and cars were damaged after most of the rockets landed in a residential neighbourhood near the U.S. embassy.

The embassy said the explosions caused minor damage to its compound but that there were no injuries or casualties.

In a statement, the spokesman of CENTCOM, Capt. William Urban said 21 rockets were fired on the area which he said was the largest rocket attack since 2010.

The world held its breath as Mr. Trump went into a Security Council meeting following the attack.

Addressing a news conference after the meeting, Mr. Trump ruled out an attack against Iran, saying an assessment of the damage showed that no American soldier was harmed.

USA : What Really Saved the Republic From Trump?

Japan Orders Chinese Ships Out of Its Territorial Waters

Donald Trump: Revealing the Underbelly of US Politics?

Overview of the numerous lawsuits Trump May Face After Presidency