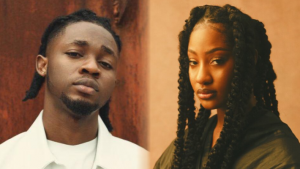 The singers were arrested on Saturday night at the Ddungu Resort in the capital Kampala, alongside another Nigerian, Muyiwa Awoniyi — an artiste manager and four Ugandan nationals including the manager of the leisure centre.

Details on the charge sheet shared on the verified Twitter handle of the Ugandan police on Monday afternoon, accused the suspects of organising a music concert which hosted over 200 attendees, in flagrant breach of the guidelines stipulated by the country’s health ministry, following a surge in coronavirus infections in the East African nation.

Omah Lay, 23, and Tems, 25, were said to have performed in the concert, which police authorities in that country have described as a “negligent act likely to spread infection of disease.”

The Ugandan Police tweeted that an earlier plan to release the accused persons was suspended after their case file was sanctioned by the country’s Director of Public Prosecutions.

It also noted that the suspects, who were earlier pictured in handcuffs would be remanded till Wednesday. 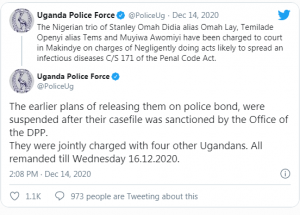 Peoples Gazette could not immediately verify if the Nigerians have been granted access to legal representation.

Nigeria’s foreign affairs ministry has yet to issue a statement on the matter, which trended across social media platforms for the most parts of Monday. A spokesman for the ministry also declined multiple requests seeking comments Monday evening.

Omah Lay, who had taken to his Twitter handle on Monday afternoon to voice his innocence on the charges, had accused Ugandan authorities of rejecting entreaties from the Nigerian government, which he said has been making efforts to secure his release but to no avail.

When the Gazette reached out to the chairperson of Nigerians in Diaspora Commission, Abike Dabiri-Erewa, she told our correspondent that efforts were underway to ensure the release and safe return of the Nigerian entertainers.

“We are doing everything possible to get them freed,” Ms. Dabiri-Erewa said. “Our mission in Uganda has been on the case, and so has the Minister of Foreign Affairs. I have also been in touch with their lawyers.”

Many Nigerian celebrities have joined calls for the immediate release of their colleagues, as the situation could threaten the participation of Nigerian singers who have been billed to perform at the forthcoming MTV Africa Music Awards slated to hold in Uganda in February 2021.

Human rights groups in Uganda have accused President Yoweri Museveni of weaponising COVID-19 for repression of opposition candidates, as the country’s presidential election draws near.