Youthful Signals and the Trouble with Nigeria’s Political Party System

There is something quirky about political parties in many developing nations and this article is tailored to use the Nigerian scenario as a tabula-rasa for understanding why some party potentates seem to dictate party policies and directions especially who should contest, when and where. 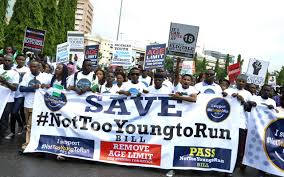 In writing this piece, we should advert our minds to the definition of a political party as a publicly organized group with the aim of gaining political power in order to direct governmental policies that in its best interest will serve the national interest. The keyword in this definition is, from the purpose of this piece “in its best interest”. I zeroed-in on that phrase as a pointer why we have different political parties with varied ideological leanings or zero ideological platforms. Without going into the study of political party ideological classification, there is no doubt that after the First Republic, Nigerian parties were formed on personal/group interest ideological basis, which at best may be referred to as plutocracy; a party system where moneybags decide state policies and what goes to the masses according to their (plutocrats) best interests.

The predatory nature of these classes of interests and the resultant effect on the economy was succinctly elucidated in Tope Fasua’s damning statistics about Nigeria operating the lowest budget per-capital in the world despite being the seventh-largest population. For these same reasons, reports also say that 40% of the world poorest will come from Nigeria and DR Congo in the future. Similarly, with a per capital of $115 and $130 respectively, Nigeria, despite recognized as the Giant of Africa records lower than many African countries and even war-torn Libya. Other areas of economic measures were our obtuse political-economic system has reduced the nation to a laughing stock in the comity of nations are according to an analysis by Lekan Sote in one of his column in the Punch is that Nigeria has the 19th worst economic system in the world, the sixth most dangerous place to live in, the 22 overall worst nations on earth and the worst 8th health care system in the world! These frightening indices were captured recently in a communique issued by the Association of National Accountants in its 22nd Annual Conference held on October 8, 2018, at the International Conference Centre, Abuja. Amongst those recommendations that stand out clearly in support of the view expressed here speaks of the need to democratize the political space and elections. It frowns at the status quo by recognizing that: “Financing democracy in Nigeria is very expensive and does not permit ordinary citizens to participate in the elections. The need for political parties to be funded by their members, through crowdfunding, rather than by the state or wealthy individual”

To even assert that there are parties with an ideological bend in Nigeria’s political space is akin to searching for a pin a haystack for there is just none. Attempts by successive parties which seemingly laid claim to the left of the
continuum since the Second Republic is a fall-off of the General Ibrahim Babangida attempt at creating two political parties in the 90s which he named the National Republican Convention and the Social Democratic Party which for the sake of belonging, attracted the Ultra-rightists and the Middle-of-the-road ideologues respectively. Till this day, many actors who were part of those two strange military contraptions have traversed at one time or the other, all the parties, whether they are termed progressive or reactionary.

Note that the term reactionary and progressive loosely refer to the classification of parties based on their ideological position on the political continuum, so to even refer to the ruling All Progressive Party, APC, as a party of progressives is as good as conveniently lumping all flying animals together as birds! While it’s true that personal attitude of some potentates in the party may possibly advertise progressive tendencies, the party manifestos even if geared towards progressivism, has laid prostrate this assumption at the door of execution, as a reactionary party. This was manifested recently during the debate on national minimum wage where the nation was virtually on its knees begging before the national assembly grudgingly passed a minimum wage bill of a meagre N30,000!

On the other hand, the Peoples’ Democratic Party, PDP is an ultra-right party with a more developed pedigree of loyalty from an expanding class of national bourgeoisie; having its root in the conservative political parties of the First Republic – the union of the Northern People Congress, NPC and the National Convention of Nigeria Citizens, NCNC. Unlike the PDP, the APC that is laying claim to being progressives cannot boast of members from the ancestry from radicals like the late Pa Obafemi Awolowo, J. S Takar, Mallam Aminu Kano and so on. The reason for this is not far-fetched; radical political activism since the 1990s have been equated with poverty and this standard was strongly reinforced by successive corrupt military interregna that punctuated governance since independence. Thus, you find that whenever the military withdraws to the barracks for civil rule, the ultra-rightists, ever ready to fill the vacuum – they are usually part of the praetorian regime – simply drop the khaki identity, to donning mufti as civilian government, while the “progressives’ or middle-roaders” are struggling to put together a team. Manifestly, we had these examples in the character of the civilians that made up the major actors of the Second, Third
Republics and the current Fourth Republic.

Such political inexactitude have become a burden on the Nigerian electors as to determine where they stand on the issue of national discourses and agenda for growth and development. The ongoing cataclysm involving youth restiveness and disenchantment with the two major parties will sooner embroil newer addition to Nigeria’s expanding number of political parties. There’s not a single party in Nigeria that can boast of a verifiable list of members other than a few executive members from the ward to the national levels. It becomes a fait accompli that
crowdfunding which is the norm in other developing society is not known to our parties. All the levels of party executives are financed by party bigwigs and these determine the direction and manifestoes to the parties. The result is that the financiers not only decide what to be done as a government, but who to run for what offices. One is therefore tempted to ask; whither the party of the youths as is been canvassed by the dictates of the present political mood in the country?

Since 1999, the Nigerian governors, with their inexhaustible budgetary allocations and unbudgeted monthly share from a strange fund called Excess Crude Account, ECA, have become political Leviathans in their domains. Besides the fact that it’s wondrous that while other nations put aside such excess funds from export as fund for future generations, these funds have become sources of deep corruption and mismanagement by state governors such that a certain state governor once boasted that he will destroy his political party if he is not allowed to have his way in an internal dispute related to the choice of leadership. A similar scenario is played out recently in the ruling APC where governors in a see-saw tangle with the party hierarchy and who should command the means to effect a change of the party’s fortune where they hold forth, deployed their financial muscle to play the bull in the chinaware shop; overthrew the party chairman and the resultant loss of political fortunes in its only former state in the South-south.

Ipso facto, where potentates become too strong to be disciplined by the party they belong and where the electors are mere spectators in an organization they are supposed to belong, party supremacy is undermined. A truly democratically organized political party should be able to sanction any of its members irrespective of what position he/she occupies.

As the nation witnesses a new tide in youth political activism, occasioned by the #EndSARS Uprising, one is wont to ask when the old ship draws away and the new one sails into the harbour, what characteristics will make up the new? Will the electoral system that demands a certain measure of national spread allows for a mass-based party without the moneybags? When the new ship’s berth, will they, like the old not choose the same inertia and stay-put rots as of the old? Does a system actually become old because the actors are ageing? What is the role of political dynamism in nation-building? These are the challenges before the nation’s youths if they must rebuild the country for a brighter tomorrow.